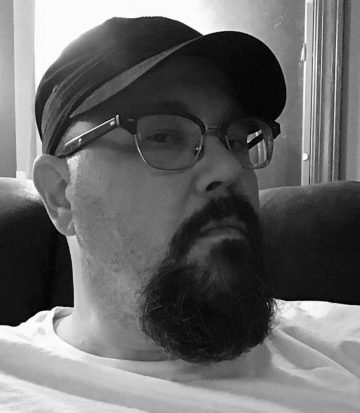 “After much prayerful consideration, Sacred Warrior is pleased to announce Erik Schelling as the band’s new lead vocalist. After conducting a nationwide search and three audition phases, the Lord brought us someone in our own backyard.

Growing up singing in Church and on worship teams, Erik always had a much edgier side to him. He listened to Christian hard rock and metal exclusively as a teen, including Sacred Warrior. He was in Christian rock band 95one from 1999-2006, which recorded and performed original music. In 2001, he also played the Cornerstone Festival with Christian band Trytan (Trytan Prog Rock-Metal), sharing the stage with the band he’d later join.

Known as the “guy with the powerfully high voice”, he was always a target of classic rock cover bands. Although he briefly joined a couple, he couldn’t be satisfied playing someone else’s music and not having a purpose.

Erik has been using his talents in the worship setting for the last several years, but never forgot his metal influences. At the nudge of the Holy Spirit to a pastor and fellow fan, he was challenged to audition after seeing the Facebook post calling for auditions. As with the Lord’s perfect plan, Erik’s obedience has opened up doors for him and the band to record and release new music to the next generation of Warriors. We can’t wait to share these songs with you soon!”