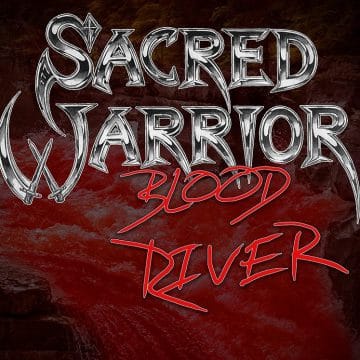 Christian heavy metal rockers, Sacred Warrior, have released a lyric video for their new song “Blood River” which sees the return of long-time lead vocalist Rey Parra who replaced singer Eli Prinsen in or about December 2016. The group had released a video teaser for the song way back in March 2018.

“Sacred Warrior is proud to announce the release of their newest single, “Blood River”! This is the culmination of many months of work, and showcases the newer, more modern sound that Sacred Warrior is developing. While the production value has significantly elevated, and the style and sounds may be different than what you’re used to, the lyrics are 100% in your face and uncompromising as you’ve all come to expect from Sacred Warrior. This song is the heart cry of a pathetic, broken person who is losing the battle with the “old man”, and whose only recourse is to cry out to God to be immersed and washed in the blood of Christ, the only source of salvation and regeneration! We hope it encourages your soul, and would love to have it shared with those who may need to hear it. Released at YouTube initially, online and streaming services to follow!”

Sacred Warrior is proud to announce the release of their newest single, “Blood River”! This is the culmination of many months of work, and showcases the newe…