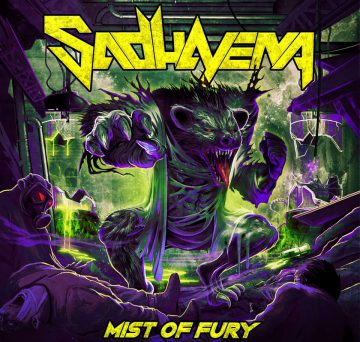 The following message was posted in part on Sadhayena‘s Facebook page earlier today (with slight edits):

“Initially created by Martin “Shenzi” Lourdelet and Romain “Raven” Scortatore, Sadhayena has evolved since their first album and is now offering elaborated melodies and powerful vibes. With a new line-up with Antoine Denis on drums and his latest recruit on vocals, Quentin Le Querré, the band is back with a new album, Mist of Fury, scheduled for release on August 28th.

This new opus marks a revival for Sadhayena and is moving away from a traditional style towards a much more diverse and surprising music, freely mixing metal related genres, keeping as many fans as possible loyal to their music. Mist of Fury was recorded and mixed at BBR – Brown Bear Recording and mastered at Deviant Lab / Thibault Chaumont (Ultra Vomit, Mass Hysteria, …).

For more information about Sadhayena and the new album, please contact : sadhayena@gmail.com”

Sadhayena‘s “No Time To Waste” video (from Emergency album):