Sainted Sinners featuring former Accept, Bangalore Choir, Bonfire and Tango Down singer David Reece have released a video for their new song “We Are All Sainted Sinners” which will appear on their self-titled debut album, which will be released via El Puerto Records on February 24, 2017.

“Expressing the “pure essence of rock’n’roll”, was the ambition that paired five well-known and experienced musicians together in early 2016, to create and play the music which is deeply inside their hearts and in their blood. The love for rock legends, such as Deep Purple, Led Zeppelin, Rainbow, Whitesnake, UFO, Black Sabbath, Van Halen and many others, built the cornerstone for the music of the new founded five-piece called Sainted Sinners. 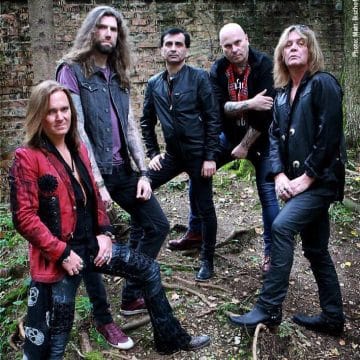 Fronted by the unique, soul-driven voice of American born vocalist David Reece (ex-Accept) and highly gifted guitar player Frank Pané, Sainted Sinners got completed by legendary keyboard player Ferdy Doernberg (Axel Rudi Pell) and the dynamic rhythm section of the two former Purpendicular members Malte Frederik Burkert (bass) and the Hungarian drum maestro Berci Hirleman. “The idea first started with me thinking about forming a band where I can follow my natural taste of music without compromises. I was writing music and then basically formed the band around who would fit the direction it was going”, remembers Frank Pané, whose first step was to contact his former bandmate David Reece.

“Being one of my all-time favourite singers, he was my obvious choice. It just clicked immediately and so we agreed to lead the band together as we trust and respect each other.” Oklahoma born frontman David Reece grew up with the country music of artists like Hank Williams and discovered his love for rock music with the early works of The Who, Rolling Stones and Deep Purple. “I’ve toured around this wonderful world and learned many things about being a front-man and what it takes to bring the best game I’ve got to deliver to those who like me, love music and live it each and every day. I’ve also learned that in order to win, you must play with a real and meaningful team of players and writers – because teams win! And Sainted Sinners to me is a team, I feel very much a part of in my heart and cannot wait for the world to see and hear what we’ve created!” So when Reece was visited by Pané in his new home in the heart of Italy, his decision came quickly. “I always knew that his guitar playing was exceptional and it definitely was the right time to create some outstanding music. So he first played me what was supposed to become ‘Truth Is A Lie’ and I immediately grabbed onto the melody and it just kind of flowed from there”, remembers the vocalist, who released a milestone in rock and metal history with the successful Accept record »Eat The Heat«, out in 1989.

“We have followed our natural creativity”, states Pané, who is in the music scene since more than two decades and was part of a.o. progressive metal act Valleys Eve and among others also the eminently respectable Purpendicular. “It became very clear, that we shared the same vision and creative ideas”, added Reece. “Frank came to me with an album full of music that honestly was incredibly easy to absorb and write, too. He also respects me as a person and a singer, so it lifted me to apply my ideas on his music.” Call it magic, but this is what it takes to create an outstanding and unique record. “Sometimes it’s even a little spooky how easy it was working together. One had an idea and the other followed with exactly what the other had in mind… some telepathic thing going on”, commented the guitar player. 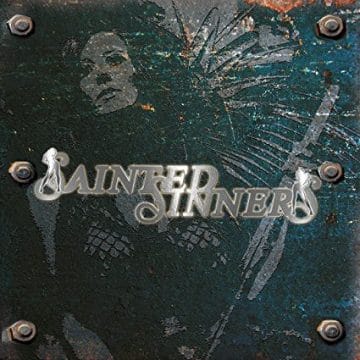 The self-titled debut album, which will be out on the uprising El Puerto Records label in February 24th 2017, tells a lot of rock’n’roll stories, written by the sophisticated vocalist. “I had a pretty rough year”, starts the singer and reaches back: “Lyrics are just stories about what I am going through as a person. Also the world stage of late has offered a plethora of topics and inspiration to write about.” Some of them are autobiographic and far away from what he calls “baby-baby-whoah”-lyrics. Both music and lyrics work together perfectly and make a great package, including outstanding tracks like the two singles ‘Maybe She’s Got Balls’ and ‘We’re All Sainted Sinners’, the furious opener ‘Knight Of The Long Knives’ or the gripping ‘Blue Lightning Man’. Classic Hard Rock with deep emotions, heart and soul… and a lot of balls! Those eleven tracks of the self-titled debut album were written and produced by Frank Pané and David Reece, partly recorded at Sound Design in Germany with Robbie Hochwind during mid-summer 2016, as well as in early fall 2016 by Mario Percudani at the Tanzan Music Studios.

The final mastering was done by Daniele Mandelli at Tanzan Music Studios in late fall 2016. “I feel a very strong sense of pride! I feel it’s a great representation of who I and we are”, summarizes David Reece, who calls the eleven tracks colorful. “Concerning the logistic distance between everybody and the fact that we just started as a band, it’s a very promising debut with many albums to follow”, rejoices Frank Pané. And it becomes obvious, that »Sainted Sinners« is the beginning of a new, exciting hard rocking fairytale.”