Current Sainted Sinners and former Accept and Tango Down singer David Reece was recently interviewed by Jimmy Kay from Canada’s The Metal Voice along with guitarist Frank Pané and asked what happened on why he is no longer in Bonfire. 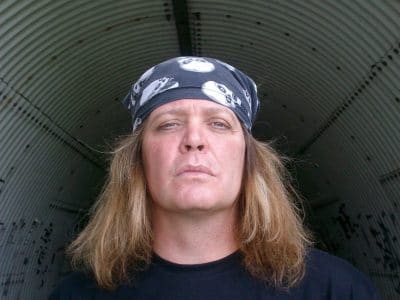 Reece stated: “Actually, I did to set the record straight if that’s what we are going to do. Hans [Ziller] and I did EZ Livin’. We did Glorious. Then we did the [inaudible] and Pearls albums together so four albums. Hmmm. You know, there’s… In all reality you know, I don’t think that there’s room to throw shit at each other. I just personally was very unhappy working with Hans and he was unhappy working with me. And I disagreed with management and they disagreed with me. Hmmm. I had basically decided to leave this month. I had made up my mind that I wanted out of the band and I don’t know [Sainted Sinners guitarist] Frank [Pané]. It just kind of crashed down here in July in Italy. Unfortunately, it got really ugly but I hold no animosity. I am actually physically and mentally better not being in that environment because when I pulled out of it was him [pointing to Frank Pané].

So it — he and I — it’s you know Hans‘ [Ziller] band and basically we’re all hired guns and so, over the last six months before I left the band, Frank and I were just sort of hanging out and talking about things and then uhhh, I think it was after [inaudible], Frank came to my house in Italy and his wife was working in the south of Italy so he asked if he could come with the children and stay with me, and I said “Yeah. Let’s talk about things” because it was kind of ugly on how it ended. So we sat down and Frank said, “I really want to work with you. Are you open minded to it?” And I said, “Yeah. You’re a great person and I developed this bond with you and I love your playing.” So, we wrote…”

You can hear the rest of the interview by The Metal Voice in the video below: