Sainted Sinners featuring former Accept, Bangalore Choir, Bonfire and Tango Down singer David Reece will be releasing their sophomore album Back With A Vengeance via El Puerto Records on February 16, 2018, which is almost one year after the release of their debut self-titled album. 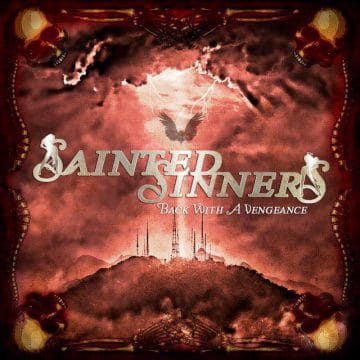 Amazon states the following about Sainted Sinners‘ debut self-titled album: “Expressing the “pure essence of rock ‘n’ roll”, was the ambition that paired five well-known and experienced musicians together in early 2016, to create and play the music which is deeply inside their hearts and in their blood. The love for rock legends, such as Deep Purple, Led Zeppelin, Rainbow, Whitesnake, UFO, Black Sabbath, Van Halen and many others, built the cornerstone for the music of the new founded five-piece called Sainted Sinners. Fronted by the unique, soul-driven voice of American born vocalist David Reece (ex-Accept) and highly gifted guitar player Frank Pané, Sainted Sinners got completed by legendary keyboard player Ferdy Doernberg (Axel Rudi Pell) and the dynamic rhythm section of the two former Purpendicular members Malte Frederik Burkert (bass) and the Hungarian drum maestro Berci Hirleman. The self-titled debut album tells a lot of rock ‘n’ roll stories, written by the sophisticated vocalist. Some of them are autobiographical and far away from what he calls “baby-baby-whoah”-lyrics. These 11 tracks on the self-titled debut album were written and produced by Frank Pané and David Reece, partly recorded at Sound Design in Germany with Robbie Hochwind during mid-summer 2016, as well as in early fall 2016 by Mario Percudani at the Tanzan Music Studios. The final mastering was done by Daniele Mandelli at Tanzan Music Studios in late fall 2016.”