American shock rockers Salems Lott have released a new EP entitled Mask Of Morality (Part 1) along with a lyric video for the song “When Heaven Comes Down” and with the song “You Can’t Hide From The Beast Inside” available for streaming. 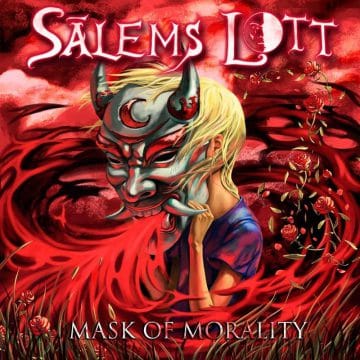 Salems Lott‘s Biography on their Facebook page states in part (with slight edits):

“Salems Lott is an American shock metal band formed in late 2013 in Hollywood, California. They are known for their high-energy and crowd pumping stage performances and an explosive new sound that captures the audience from start to finish. The band has played infamous Hollywood stages such as a sold-out show at The Roxy Theatre, a sold-out show at The House Of Blues, The Whisky A Go Go, SIR Studios and many more. The band is quickly climbing the ranks of the Los Angeles rock scene and is one of the most prominent live acts to see in Los Angeles.

Salems Lott’s debut single “No Choice To Love” was featured on Classic Rock Magazine‘s Top Tracks. Their debut music video on YouTube has generated over 70,000 views two months into its release; while their music has been featured on SiriusXM Radio, Fireworks Magazine UK, Ultimate Guitar, Sleaze Roxx, TeamRock and That’s Metal Magazine.

To ensure a continuous outlet for the band’s music, Salems Lott founded their own independent label Rēd Moon Rēcords and released their debut EP with national and international physical/digital distribution. Upon its release, their debut EP has been receiving rave reviews, high demand in the US/Worldwide and physical copies sold-out in Japan in under two weeks. “No Choice To Love” has also been featured as top track of the week in Revolver Magazine.

Salems Lott is the ultimate antithesis to the ever so tame “modern” rock scene.”

Track List for Mask Of Morality (Part 1):
01. Enigma
02. When Heaven Comes Down
03. You Can’t Hide From The Beast Inside

Salems Lott‘s “You Can’t Hide From The Beast Inside” song:

Salems Lott’s official audio stream for ‘You Can’t Hide from the Beast Inside’ from the record ‘Mask Of Morality’. – PRE-ORDER NOW.Digital: http://smarturl.i…