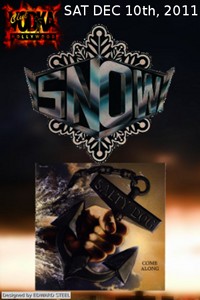 The original members of Salty Dog will reuniting for an December 10th show at the Key Club in Hollywood, California. Jimmi Bleacher (vocals), Pete Reveen (guitar), Michael Hannon (bass) and Khurt Maier (drums) will be performing their 1990 Geffen album ‘Every Dog Has Its Day’ in it’s entirety plus some other surprises.

Michael Hannon recently spoke to the From Out Of Nowhere’ podcast at fromoutofnowheremedia.tumblr.com about the Salty Dog reunion and played the band’s rare Kerrang! flexi-disc track “Sad To Be Alone”.

‘Every Dog Has Its Day’ was reissued in 2010 by Bad Reputation Records with four bonus tracks and can be purchased at www.badreputation.fr.

Michael Hannon’s current outfit American Dog will be entering the studio with producer Joe Viers at the the end of November to record the follow-up to their 2010 release ‘Mean’. American Dog also released their ‘All Over The Road – Volume Two’ DVD in late 2010 and will be performing their XXX-Mas party on December 17th at the Cock-n-Bull in Summit Station/Pataskala, Ohio. The trio’s entire discography can be purchased at www.americandog.us.