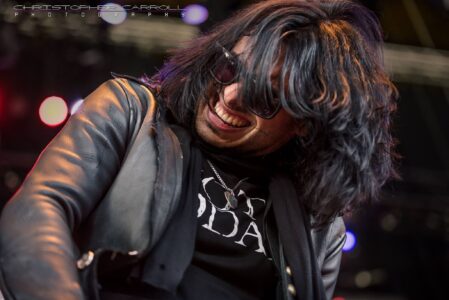 Given that Faster Pussycat recently signed with Golden Robot Records, Koltun was asked whether the band has any new music in the works to which he replied (as provided by the Hard, Heavy & Hair Show with Pariah Burke with slight edits): “Just signed a deal with Golden Robot Records, so we’re going to be putting out some singles. I think the plan for the first one, I’m not sure don’t quote me because this is just what I was told. But it could have changed. I think they want to rerelease “NOLA” that we — the new single — we released in 2021 since we kind of just put it out and it was like, boom, hear the song, you know? But it didn’t really get like distributed or I don’t really know how any of that stuff works.”

Koltun added: “So we’re going to — I think that song is going to get rereleased so that that is a thing. So people are scouring for it. And then and then there’s more songs. So there’s two more songs that are mixed, mastered, ready to come out. It’s a new original and a new cover. The original, I believe it’s called “Like A Ghost”. We’ve just been calling it “Ghost”. But I think Tamie [Downe] wants to actually call it “Like A Ghost”. And then there’s a cover of the Buffalo Springfield song, “For What It’s Worth”…. So the those two are ready to go. And then Taime‘s been working on another song called “Motorbike”. They’ve played a bunch of guitar on and it’s kind of like I kind of just need to get back home so we can do a few more things on that song. I believe, and then we’ll just kind of keep working on some other ones he’s had sitting around.”

On whether there is a new album coming, Koltun indicated: “Maybe it might eventually become a record, but I think the current plan is to do singles and then like an EP kind of thing, which it’s kind of like honestly, it’s kind of a similar thing to what Budderside is doing too with the singles. Because it’s like the song gets to come out, people get to have it for a while, they get to live, you know, it gets to have like a life kind of instead of just putting out a record of ten or 12 songs and then it’s just like, it’s there and then, you know, I guess because people’s attention spans are everybody’s got A.D.D. now.”

You can listen to the interview with Sam Bam Koltun on the Hard, Heavy  & Hair Show with Pariah Burke podcast below: