It seems that blockbuster tour packages are the norm for this upcoming summer as former Van Halen frontman Sammy Hagar has announced that Whitesnake, Sammy Hagar & The Circle and Night Ranger will be touring together in the future. 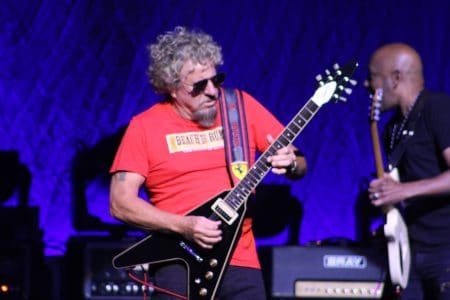 During the 2020 MusiCares Red Carpet event on January 24, 2020, Hagar was asked by PeopleTV what he was most excited about to which he stated (as transcribed by Sleaze Roxx): “They — we have an announcement. We’re going to do a 30-40 city tour coming up in July. So the announcement will be made Monday. I am very excited about that with my band The Circle. We made a record last year. We had a number one album. In my whole career — in Van Halen, we had all number one albums but as a solo artist, never had a Top 10 record. We had #4 in one category, number one in three categories. And that was a big deal for me so I am going to support that record again this year. We did 30 shows last year. We’re going to do 39, 49. The reason that I am doing more is that I am feeling really good. I wanted to go out and see, and see if I have the energy and enthusiasm to sing every night — not every night, but three to four nights a week — and still want to do it. When the tour was over last year, I was like ‘Aaah.’ You know I had a good time and I felt like we were just getting in stride. So I committed, I committed to a 39 city tour, which will end up 45-50. Whitesnake‘s on the tour with us. Night Ranger. It’s kind of a classic rock. But you’ve got two singers — David Coverdale and my voice — we’ve got the same fans.”

We’re live from the red carpet at the 2020 MusiCares Person Of The Year tribute honoring AerosmithSubscribe to PeopleTV ►► http://bit.ly/SubscribePeopleTVRed…