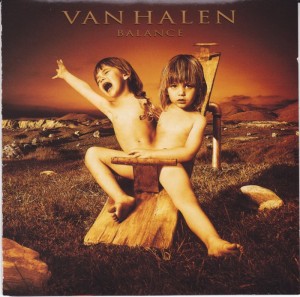 January 24, 2016 marks the 21st year anniversary of the release of Van Halen‘s number one album Balance and the fourth studio album released by the group with Sammy Hagar at the helm.

Hagar has just released an audio recording today where he shares his thoughts on Balance and where the band was at during that point. Excerpts from the audio recording include:

“Sammy here — this is for the Balance record. That record has the comedy and tragedy effect. You know, the double-edged sword; the good and the bad. I think that it is one of the most soulful records and vocal performance lyrically and everything else that I have ever done in my life, right up there with Marching To Mars for being pretty much a statement of where I was at that time in my life but not really in a great place. That was the end of it for Van Halen. I knew it. We all knew it within the inner circles and it was kind of a painful thing. Eddie and I weren’t getting along. God bless Bruce Fairbairn for producing that record and squeezing it out of us. He had to pull me out of the studio and take me up to Bryan Adams‘ studio up in Vancouver…” “All in all, it had some good songs on it. It was not a happy record. It was the darkest Van Halen record ever for my time in the band. What else can I say? You know, number one album — wow! A great huge successful world tour ending in Japan and Hawaii and saying “Bye bye.” It was uh, I have to say good and bad memories. All and all, I am impressed with what we got done under a very difficult relationship between us. I was going through a divorce at that time which is a horrible painful experience as well as going through a divorce with the band…”

“But looking back now, the whole experience was so valuable because I am such a positive person and a happy person and I was miserable and it taught me to never do that again; to allow myself to be in that situation. And the reunion tour that followed years down the road wasn’t any better of an experience and I don’t like that kind of thing so sunshine, feet in the sand, flip-flops, tank tops around the clock non-stop is my way of balancing that era. Thank you.”

Sammy shares some personal history around the release of Van Halen’s “Balance”, 21 years ago today in 1995.”Although it is mixed with both dark and light, I …

Don’t Tell Me What Love Can Do)