Sammy Hagar & The Circle consisting of the ‘Red Rocker’ Sammy Hagar (Montrose, Van Halen, Chickenfoot) on lead vocals and guitar, Michael Anthony (Van Halen, Chickenfoot) on bass, Jason Bonham (Bonham, Foreigner, Black Country Communion) on drums and Vic Johnson on guitar have released a ‘lockdown’ style video for their cover of Moon Martin‘s “Bad Case of Loving You (Doctor Doctor).” That track was subsequently recorded by Robert Palmer and became a hit single for the singer in 1979. 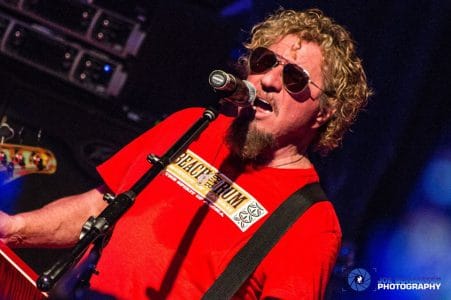 Earlier this year, the group released an album titled Lockdown 2020, which was a compilation of tracks that they have recorded and released via video since the advent of the Covid pandemic last year. It appears that Sammy Hagar & The Circle may be poised to do a follow up to Lockdown 2020.

Sammy Hagar & The Circle‘s album Space Between finished at #8 on the Sleaze Roxx’s Top Ten Albums of 2019 to which Sleaze Roxx stated: “Although Sleaze Roxx definitely caters to hard rock and heavy metal bands from the ’80s era, you’ll likely have noticed that there are no bands from that era that feature on the Sleaze Roxx’s Top Ten Albums of 2019. In fact, many of the artists that released an album worthy of Sleaze Roxx‘s Top 10 for 2019 weren’t even born in the ’80s. The one exception is the Red Rocker, Sammy Hagar, who along with his stellar cast (The Circle) consisting of former Van Halen bassist Michael Anthony, legendary drummer John Bonham‘s son Jason Bonham, and guitarist Vic Johnson, are proving that age does not matter and you can still put out one of the best albums of your career decades after first starting out in the music business.

You’d think that with all of the money that Hagar has made over the years with his many enterprises including his Cabo Wabo Tequila (his 80% share was sold for a cool $80 million), the now 72 year old rocker would be happy sitting on his laurels and reaping the benefits of his Montrose and Van Halen days (not to mention his stellar solo career). Apparently not as Hagar has come up with arguably one of the best albums of his career with Sammy Hagar & The Circle‘s debut concept studio album Space Between. This album fits nicely alongside anything that Hagar released while in Van Halen. While the Red Rocker has released a few dud albums over the last decade, Space Between shows that the 72 year old rocker still has a lot of gas in the tank. Eddie Van Halen must be sitting back at home and wondering “what if” when he sees Hagar still cranking out such amazing albums almost 25 years after Van Halen‘s last studio album (Balance) with the Red Rocker.”