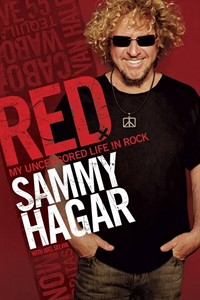 Jennifer Schuessler NYTimes.com reports: Sammy Hagar may have lost his job fronting Van Halen, but he zooms to the top of the hardcover nonfiction list this week with “Red: My Uncensored Life in Rock.”

Hagar has spent the last 25 years locked in a Bush v. Gore-style battle with David Lee Roth over control of the Van Halen mic, and he gives some of the gory details here, though his true feelings can be a bit hard to untangle. “I hated Dave. The guy rubbed me wrong,” he writes at one point, before adding, “I’m sure I rub all kinds of people wrong, so it’s not like I’m putting him down.”

Roth’s own memoir, “Crazy From the Heat,” failed to make the best-seller list back in 1997. (Team Hagar!) But it did include a defense of the infamous 1982 Van Halen tour rider stipulating that all backstage dressing rooms be stocked with bowls of M&M’s carefully purged of all the brown ones. This was supposedly meant to verify that venue operators had read the contract down to the last safety-oriented detail of the band’s elaborate rigging, not to project maximum rock-star decadence (though Roth did admit to having “$12,000 worth of fun” trashing a dressing room in Pueblo, Colo., after he found some brown M&M’s). Still unexplained, however, is the requirement — revealed when The Smoking Gun unearthed a copy of the 53-page rider a few years ago — that the Van Halen dinner spread must include brussels sprouts on even-numbered days and peas on odd ones, and “herring in sour cream” and a case of Country Time

Courtesy of www.sleazeroxx.com and www.nytimes.com