Former Van Halen frontman, entrepreneur and 70 year old performer Sammy Hagar was recently interviewed by WRIF’s Meltdown and spoke about his career goals and a new concert film entitled Red Til I’m Dead, which will be showed at selected theaters in the USA on December 5, 2017. 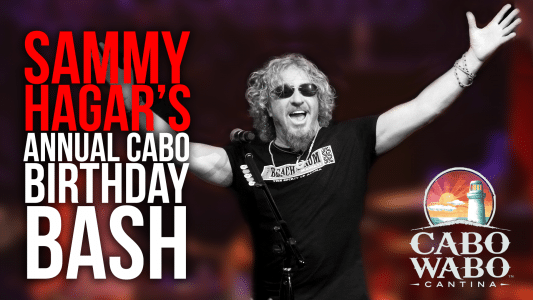 Quotes from the interview on 105.7 WROR Boston’s Greatest Hits‘ website include:

“The Cabo Wabo Cantina only holds about 6-700 people. We sell 500 tickets every year for four nights, so we sell 2,000 tickets. This year, there were 100,000 people in the lottery trying to get tickets…Long story short, I thought, ‘We gotta film this thing while I’m still doing it and still having so much fun doing it so the fans can see it.’ It’s really a shame, and I felt terrible, [because] thousands of people were out in front [of Cabo Wabo Cantina] this year that couldn’t get in. Every single night [there] were thousands sleeping on the sidewalk, hanging around in the parking lot just trying to get in…It’s really got that intense, so everyone gets to see it, and it’s awesome!”

Sammy Hagar & The Circle with Toby Keith performing “I Love This Bar” and “Finish What Ya Started” at Sammy Hagar‘s Birthday Bash 2017:

Cabo Wabo 2017. I love this bar and finish what you started.