Santa Cruz have assured fans that they are working through their problems after three members quit leaving frontman Archie Cruz to cancel the remainder of their US tour. Santa Cruz have promised their fans that “all will be ok” following their shock split. During their tour of the United States of America, the Finnish rockers cancelled a number of dates for undisclosed reasons. Front man Archie Cruz then claimed in an Instagram post that the other members of the Finnish rock group kicked him off their tour bus and said they were no longer part of the band. Guitarist Johnny Parkkonen, bassist Middy Toivonen and drummer Taz Fagerstrom have all sinced released statements on their own social media pages claiming they had left the band as they were unable to continue. 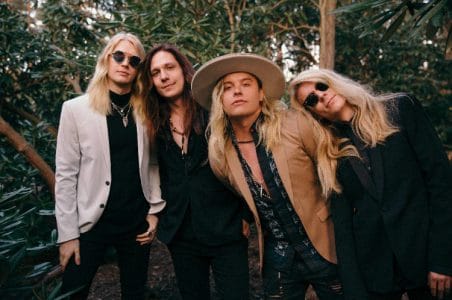 In a short statement on their Facebook page earlier today, the group reassured fans and shed some light on what was happening since their announcement by stating: “Thank you fans for all your messages. All bands have problems and we’re working through one right now but we will all be ok. We will tell you more later on.”

Phoning in to Eddie Trunk‘s radio show Trunk Nation on March 19, 2018, Cruz also discussed the situation saying the “We Are The Ones To Fall” group were far from over. “Santa Cruz is not going anywhere,” he told the host. But the 26 year old refused to answer if he’d be getting new members to replace the three that departed. He added: “As long as Santa Cruz‘s name is up there, I’m fucking… you know. It’s who we are. We’ll see what’s going to happen.”

Trunk chimed in: “Obviously it’s a tough spot for you, you’re not sure what to say and you don’t know what you want to say. I understand that.” After clarifying that all the group members still live in Finland, Trunk added: “It’s going to have to be resolved pretty quick because otherwise you guys are in the US, where you don’t live, it costs money to be here for everybody. I would think that either everybody is going to go home or patch this up and start working again.” Cruz reponded: “Exactly. That’s the situation since at the moment. We are going to have a meeting tonight and talk it through tonight. Like a little Facetime session and shit, work it out.”

Santa Cruz, who released their third album Bad Blood Rising at the end of 2017, were touring as the main support act for Fozzy and also had a few of their own headlining dates between shows.

Archie Cruz posted on his Instagram: “archiecruzz To all ya’ll wondering why the rest of the US gigs got cancelled, the guys kicked me out of the bus on the street like a pariah and told me they’re in Santa Cruz no more. I would’ve loved to do ’em, but what can you do. And as far as I know, I am alive & well atm, so all good. Love to all ya’ll”

Parkkonen later said on his Instagram account: “johnnycruzifiedI’m very sorry to inform that I’m leaving Santa Cruz and so are Middy and Taz. We faced issues that we cannot solve even thou we tried everything that we could to make this tour and band happen. I can’t stay in a situation anymore where I have to be scared if somebody does irreversible harm to themselves or somebody else. That’s why I’m leaving. I never thought I’d be in this situation, but I have no more options to use. I’m sorry. Peace and Love ❤ –Johnny”

Toivonen then took to his Instagram page to say: “middycruz I am sorry to inform but from this day on it is impossible for me to continue as a member of Santa Cruz. I wanna thank everyone who has been there for me during But most of all I wanna thank all the fans and great people along the way. Life goes on. –Middy”

Fagerstrom followed on his Instagram page with: “So sorry to tell you that I’m no longer playing drums in Santa Cruz band, i’m not feeling good to do this anymore so i’m stepping out of that duty. Thanks for all the fans and people who we have met along the way and thanks for your endless support . Take care of each other ! ? –Taz”