Santa Cruz to release new album in September or October 2017 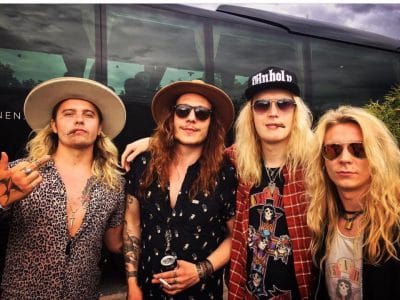 Cruz was asked whether Santa Cruz had a date picked out for the release of their fourth album to which he stated: “The new album will be released during September-October, I can’t tell the exact date yet.”

Santa Cruz‘s Screaming For Adrenaline (2013) album was quite different from the next record titled Santa Cruz (2015). It was noted to Cruz that every Santa Cruz album has its own sound and vibe to it. Cruz was asked what vibe can be expected on the new album to which he replied: “Yes, that’s true, we never wanna do the same album again. The new album has the most diverse songs we’ve ever done. I think it falls musically between our first and second album, but still shows lot of new sides. You can find the most heaviest song and the most laid back song that we’ve ever done on the album. There’s also new elements in the music that you’ve ve never heard us use before.”

In terms of the title of the new album, Cruz stated: “The title is not gonna be “Santa Cruz III” hahah. We have a name for the album but I can’t tell it yet.”

You can read the rest of the interview with Johnny Cruz at The New Wave of Hair Metal‘s Facebook page.