German sleaze / glam rockers, Sassy Society, have released a second video from their album Lipstick Love Affair, which was released on May 29, 2015. The song “Down The Road” is the latest song to get the video treatment after the album’s title track. 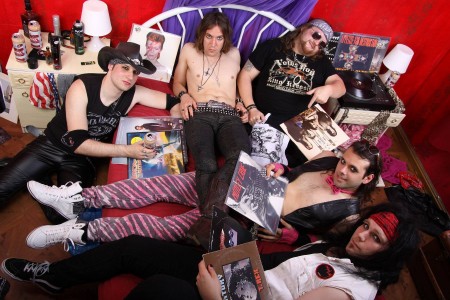 Three days ago, Sassy Society declared the following on their Facebook account regarding the new video: “Sorry for yelling in caps up there, but we’re excited. 2015 marked quite a rocky road for us with it’s ups and it’s downs. That’s why we’re ready to kiss it goodbye with a video for our song “Down The Road”.”

Sassy Society‘s Facebook bio states: “Ladies and Gentlemen! SASSY SOCIETY! A new star is born in the sky of 80’s-Rock! While Axl Rose stuffs his throat with fat, Steven Tyler prefers to jugde Pop-starlets, Vince Neil intoxicates himself with botox and Sebastian Bach pleasures the Gilmore Girls, it’s time for someone to reinvent the honors of Sleaze & Glam-Rock! This and nothing else is the ultimate goal of Sassy Society. They are a bunch of dudes from the streets of Hamburg, who will get Rock’n’Roll back into the spotlight with a fabulous mixture of juvenile enthusiasm and a decade of stage-experience. Founded in 2012, it took them only half a year to record a 6-track ep and get on stage, and there will be much more to expect in the future.  Those of you who love the combined Power of Sleaze & Glam-Rock with a giant load of kick-ass Rock’n’Roll can’t go wrong with Sassy Society. Stay tuned for some more Rock’n’Roll, and always remember: It’s not Cliche, it’s classic!!!”