Saxon release lyric video for song “The Secret Of Flight”

UK veteran heavy metal rockers Saxon have released a new lyric video for their song “The Secret Of Flight” from their latest studio album Thunderbolt.

“The Mighty Saxon are pleased to release their latest video for the track “The Secret of Flight” from their latest Thunderbolt album via an exclusive preview courtesy of Classic Rock Magazine at the following link: Tickets on Sale from Friday June 8th at 10am – Ticket Link: http://myticket.co.uk/artists/saxon

A Special Planet Rock Presale is from Wednesday June 6th at 10am. Go to www.planetrock.com for more details.

Guest Acts on the dates are German Metal Queen DORO together with UK favorites WAYWARD SONS !!

Biff Byford says “2018 is turning out to be another monumental year for Saxon. After storming across the North America with the Thunderbolt tour, we are releasing ‘Secret of flight’ from the album as the new single & video. The track has already proven to be a live monster song so as we are half way through the year’s tour schedule, it’s apt that we release it now. With that in mind, we would also like to share the following up to date stats with you all: 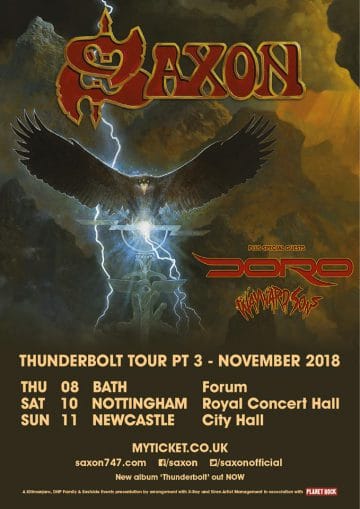 As you know we never rest, so the Thunderbolt tour continues in Europe this summer and through the Autumn – now with the addition of more UK shows!”

About the new video for ‘The Secret of Flight’ Biff adds – “Being in a touring band we fly a lot so I was sat on a plane one day thinking in the big scheme of things we didn’t discover how to fly until quite recently in man’s history – 1903 that’s only 115 years ago. I thought it would make a good subject so there you go…. The Secret of Fliight!””

The official lyric video from Saxon for the track ‘The Secret of Flight’ from their current album “Thunderbolt”, released on February 2nd. Available to buy …