Honesty is the best policy and Saxon frontman Biff Byford is apparently an up front type of man. While many artists seemingly tend to cancel tours without providing any reasons or the correct ones, Byford has announced that he is cancelling his upcoming UK and European tour due to admittedly low ticket sales and the Coronavirus. 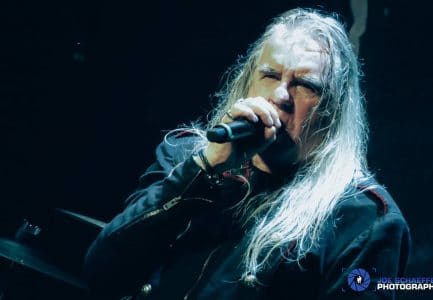 We are very sorry to announce the cancellation of the Biff Byford solo tour previously scheduled for April & May 2020. The cancellation is mainly due to low ticket sales, which may or may not have been affected by the current worldwide Covid 19 Virus pandemic.

Biff Byford “The honest truth is the tickets for the forthcoming tour have just not sold as everyone expected for whatever reason, so we have cancelled the dates as scheduled with a view to hopefully re-visiting at a later date.

It’s sad as I was looking forward to the spoken word & live band show but it’s just not to be at this time. I want to thank everyone who bought the album and supported me. Keep the faith and see you on the road with Saxon”

The show was to take an “evening with” format and will be split into two halves. The first half featured a spoken word show compared by American comedian and star of VH1 Classic’s “That Metal Show” Don Jamieson, where Don would quiz Biff on all aspects of his life and career. The second half consisted of a live show with Biff and his band.

The Dates were as follows: 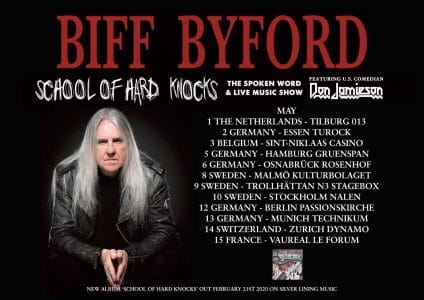 Ticket refunds are available from point of purchase.

February 21st 2020, saw the release of Biff’s first ever solo album, School of Hard Knocks on Silver Lining Music which garnered critical acclaim from all reviews and massive press & radio attention across Europe and the USA.

On School of Hard Knocks, Byford worked with Fredrik Åkesson (Opeth) on guitars, Christian Lundqvist on drums and Gus Macricostas on bass (Biff himself played a spot of four string thunder too!).

“It’s been great to break new ground, explore new territories and work with some old friends,” concludes Biff, “and having waited so long to make this album, I have to say, I am delighted with it! It has a whole range of styles, from the ridiculously heavy to ballads, and it is certainly my album.”

Last remaining tickets for the Manchester show are available from www.myticket.co.uk“