In what cannot be deemed a surprise, the Scorpions landed the #1 spot in website DW – PopXport Rankings‘ “Top 10 rock bands from Germany.” 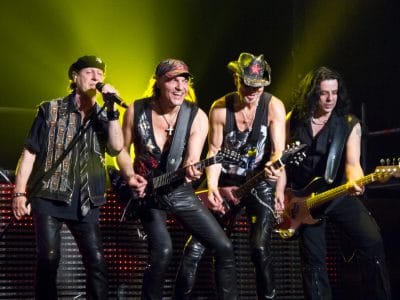 DW – PopXport stated the following about the Scorpions‘ #1 finish: “No German rock band has hit the charts more often or climbed higher than Scorpions. The band from Lower Saxony has been scoring international hits for five decades. They scrapped plans to retire a long time ago!”

Other bands to feature regularly on Sleaze Roxx that finished in DW‘s “Top 10 rock bands from Germany” include Helloween at #3 and Accept at #5.

In regards to Helloween, DW commented: “When it comes to heavy metal, Helloween are among Germany’s top exports. The Hamburg-based musicians have been thrashing their guitars since the 1980s. They soon made a name for themselves with their two-part album “Keeper of the Seven Keys.” Their album “My God-Given Right” swept the charts in Europe and Japan in 2015.”

With respect to Accept, DW stated: “Accept have been around since 1971, with a hiatus or two in between. That makes them one of the longest-running German rock bands. Udo Dirkschneider was Accept‘s original vocalist. After changing line-ups, the band’s now scoring successes with American singer Mark Tornillo. In 2014 Accept topped the German charts for the first time – with “Blind Rage,” their 14th studio album.”

You can find out the rest of the bands that landed in DW – PopXport Ranking‘s “Top 10 rock bands from Germany” as well as view a video about 25 minutes in length in that regard at DW.