Good news for Scorpions fans as despite the group having reached its 50th year anniversary, it will apparently be recording a new studio album that will be released in 2018. 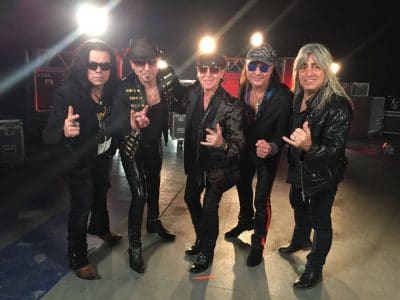 Mikkey told a press conference at the Hall Of Heavy Metal History induction ceremony that The Scorps, who celebrated fifty years of existence with one of their biggest tours ever last year, have already started working on new music and the forthcoming songs are as exciting and as vibrant as ever, just as you would expect.

The Swedish beatmeister, often referred to by Lemmy as “the best drummer in the world”, also confirmed that the band are on a much needed break at the moment but will reconvene later in the year to record their brand new opus, their first with Mikkey who was Motörhead drummer for twenty-three years.”

You can read the rest of the article at Metal Talk.

Sleaze Roxx stated the following in its review of the Scorpions‘ last studio album Return To Forever: “When I first heard Return To Forever in early 2015, I thought that the songs were catchy but a little too poppy / commercial for my taste. I did not revisit the album until earlier this week when upon seeing that the Scorpions would be playing a lot of new songs during their tour stop in Toronto, I decided to get familiar with their new material. As it turns out, I really enjoy most of the songs on the condensed version of Return To Forever (which only includes 12 tracks) but the bonus seven tracks that make up the re-release of the album mostly feel like “leftover” ones.”

Scorpions‘ “We Built This House” video:

The Scorpions perform “We Built This House”.Listen to all Scorpions songs here: https://lnk.to/TheScorpionsSubscribe the channel: https://www.youtube.com/use…