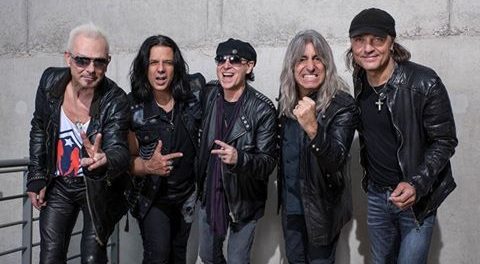 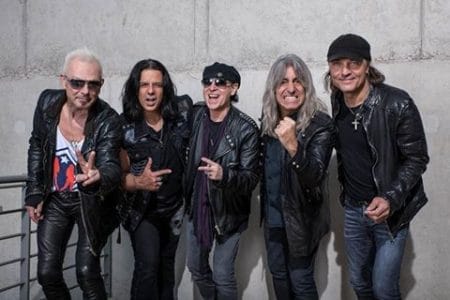 With respect to the Scorpions‘ upcoming new studio album, Meine indicated (as transcribed by Rock Talk with Mitch Lafon):

“It’s great to have Greg Fidelman (Metallica/Slipknot) on our side. From the very beginning we said, if we make a new album it’s got to be on the harder edge. It’s got to be an album with attitude. It’s got to take us back to the ’80s – where we had many many big songs and big albums like Lovedrive, Animal Magnetism, Blackout and all that stuff. It was just to try to focus on that kind of vibe. If we can pull this off after so many years, I don’t know. All I know is we started writing last year and we have lots and lots of material. What I hear everyday in the studio feels really good… we’re on the right direction; the right track.

We work on an album and we try to really go back to the Scorpions DNA from those years. It’s crazy to think about making a new album, but we’re totally in sync with Greg Fidelman. We want to go to this old vibe… After so many many years and decades to go back into the studio to work on an album and to write new material; I think it’s a blessing that we don’t sit here at home watching the grass grow. It’s so much in our veins to travel, to play shows… It feels so good to go deep into your creative world and create new material, new songs… That feels really really good.”

The Scorpions‘ last studio album dates back to Return To Forever, which was released back in 2015.

You can listen to the rest of the interview with Klaus Meine by Mitch Lafon and co-host Alan Niven for the Rock Talk with Mitch Lafon podcast below: