The Scorpions have released a live performance video of “Bad Boys Running Wild” from back in November 1991 at Deutschlandhalle in Berlin, Germany. 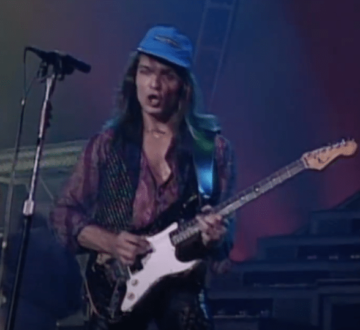 The line-up at that time was Klaus Meine on lead vocals, Matthias Jabs on lead guitar, Rudolf Schenker on rhythm guitar, Francis Buchholz on bass and Herman Rarebell on drums. Buchholz was in the Scorpions from 1974 to 1992 while Rarebell was in the band from 1977 to 1995. Meine and Schenker have been in the band since the ’60s while Jabs joined the group in 1978.

By 1991, the Scorpions were arguably at their height popularity wise with the album Crazy World (1990) spawning the worldwide hit “Wind of Change.” Wikipedia reports the following in part about the success of that song (with slight edits):

“”Wind of Change” was released as the album’s third single in January 1991 and became a worldwide hit, just after the failed coup that would eventually lead to the collapse of the Soviet Union. The song topped the charts in Germany and across Europe while peaking at number four in the United States on August 31, 1991, and at number two in the United Kingdom. It later appeared on the band’s 1995 live album Live Bites, their 2000 album with the Berlin Philharmonic Orchestra, Moment of Glory, and on their 2001 unplugged album Acoustica. The band also recorded a Russian-language version of the song, under the title “Ветер перемен” (“Veter Peremen”) and a Spanish version called “Vientos de Cambio”.