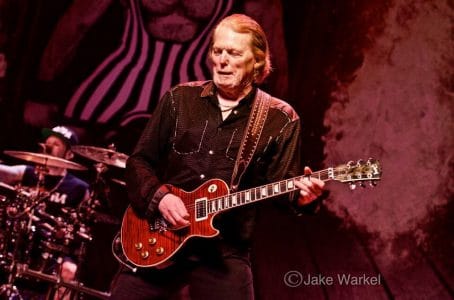 With respect to the 150 unreleased Thin Lizzy songs (2:32 of video below), Gorham stated (as transcribed by The Metal Voice with slight edits): “It wasn’t actually individual songs. There are reels not only from a friend of Phil Lynott‘s but there is another warehouse of all these tapes and  there are names on them that I don’t recognize at all. There is one song called “G.I. Joe” which became the “Boys Are Back In Town.” Phil Lynott had written this whole anti-Vietnam war song but after I am Brian Robertson [guitarist] and I put the harmonies guitar on there, Phil kind of flipped and said the Anti-War theme doesn’t really go with the mood of the song.”

In terms of his audition with Thin Lizzy many years ago (11:45), Gorham recalled: “Apparently I was the 25th guy to be auditioned, they recorded the whole audition and they sat in Phil‘s place and listened to it and said he is the guy and I got the call that night. I was just about 22 years old and I had been only playing guitar for three years I used to play bass. A friend of mine who played guitar taught me a few things. So I had only been playing guitar for three years before I joined Thin Lizzy, I don’t think a lot of people now that. ”

When asked how he and Thin Lizzy singer Phil Lynott encouraged Huey Lewis to become a singer (33:90), Gorham advised: “Huey Lewis was in a band called Clover and they were supporting us on the European and British tour. We were on the road with them for a couple of weeks and I had just happen to be out in the auditorium during their sound check. I guess the singer of Clover was some place else and Huey said he would check the singer’s microphone and he started to sing. I was shocked and said, “This guy! Wow! And all they are making him do is play harmonica?” So I went back to the dressing room and told Phil, “Huey Lewis, that guy can really sing and tomorrow at sound check have a listen.” And Phil heard him. So we were just pounding Huey and said trash that harmonica and you got to get into the spot light and you got to start singing until eventually he came up with Huey Lewis and the News, number one all over the world.”

In regard to whether work has started on a new Black Star Riders album, Gorham stated: “We are going into the studio in February 2019, so we are all ready, I think Ricky Warwick [lead vocals] has already got the lyrics done, he is like the ATM machine, he is like that prolific.”

In terms of whether there will be a Thin Lizzy reunion in the near future with original drummer Brian Downey, Gorham opined: “Yeah, there is always that chance. We are thinking next year. We are talking about possibly doing another six shows like we did a couple of years ago. But there has to be a reason to come out and do it not because you want to make some money. There has got to be a reason, an anniversary of some sort. There has to be a point.”