Former Thin Lizzy and current Black Star Riders guitarist Scott Gorham was recently interviewed by the Australian Rock Show podcast (audio below) ahead of the release of Black Star Riders‘ fourth studio album Another State of Grace. Gorham was asked how Thin Lizzy‘s twin-guitar harmony sound was born to which he replied (as transcribed by the 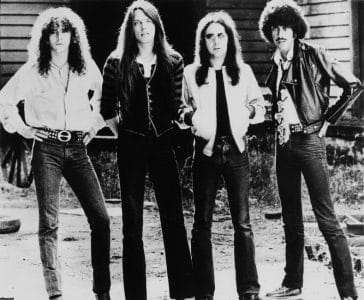 “If I’m going to be totally honest the harmony guitar thing was really more of an accident than anything else. We were in the studio and I think Brian Robertson had gone out just to record a single line and the engineer had kind of a multi-second tape delay on his guitar. So when we heard it back it fed back on itself in harmony and of course he was going ‘Oh my God, I’m sorry’ . Me and Phil (Lynott) went ‘wait a minute, that sounds really great !’

So I quickly learned the harmony to it – went out and did the harmony line, came back and listened to it and thought ‘you know that sounds really cool I’ve got another guitar line, now why don’t we try that same thing on that line also, so it just kind of went from there.

It wasn’t like a premeditated kind of thought process that we were going through. It’s just something that we heard – we really liked – it was a really cool way to present the guitars and all that, here was another thing the guitars could do and then it just kind of kept going and going and going until I actually read one day in the papers it actually said ‘Thin Lizzy and that patented harmony guitar sound that they’ve got’. I thought ‘wow we’ve got a sound – cool !’ So then we just kept going with it you know – we just loved doing it.”

You can listen to the interview with Scott Gorham by the Australian Rock Show podcast below:

Black Star Riders are set to unleash their fourth and eagerly anticipated album ‘Another State Of Grace’ in September. On episode 117 of The Australian Rock Show – renowned guitarist Scott Gorham joins us to look over the album. We talk about the band’s recent line-up changes, the new single ‘Ain’t The End of The World’ and much more.