The following message was posted in part on Screamer‘s Facebook page yesterday (with slight edits): 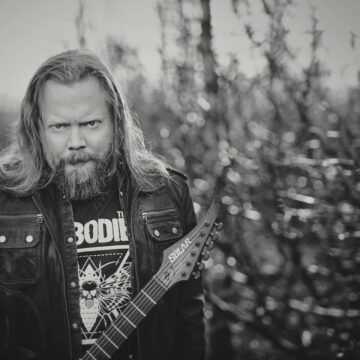 Jon is a long-time appreciated guitar player, beer-drinker and friend from Huskvarna, Småland.

His resumé in the art of riffing and song-writing in his previous bands “The Embodied” and “Shakedown Suzies” speaks for itself, and he has already proven his worth and skill in the work with finalizing our new album.

“I am honoured to be a part of the Screamer family, and I know I have some mighty shoes to fill. But I think I can do the band justice with my good Danish looks, sweet licks, soaring leads and outstanding mead drinking skills. See you on the Highway of Heroes!”

Make him feel welcome in the comment section and spread the good news!”

Back on July 13th of this year, Screamer had announced with the following Facebook message that guitarist Anton Fingal was leaving the band:

“It is with heavy hearts we announce that Anton has decided to take a new course with his life, and with doing so also leaving Screamer after 12 years in the band.

Through thick and thin, the good times have rolled, and we’ve conquered the highways over three continents together like nobody’s business. Thanks for everything, always!

Show Anton some love in the comment section and wish him the best of luck in the future!”

Screamer‘s “On My Way” video: