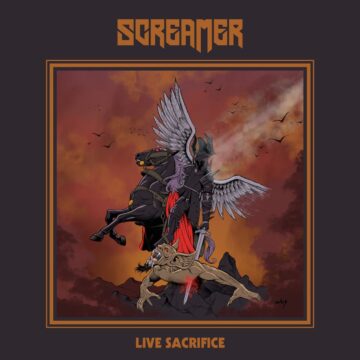 Screamer‘s website indicates (with slight edits): “Forged in steel in the dark woods of rural Sweden, Screamer flies their banner high! With their feet firmly planted in the deep traditions of heavy metal, Screamer never lose sight of what’s really important; good tunes, good brew and good times! ‘Cause with Screamer, every night is Friday night and every Friday night deserves to be a party!

As ruthless Swedish peasants, the band grew up on meat and potatoes on their plates, and that’s what’s blazing out of your speakers when putting on any of the Screamer albums. That’s why Screamer never strays far from the proven sound of roaring guitars and pounding drums that works equally well in the war pit in front of stage as when blasting through your stereo. In their music, you can hear the classic foundations laid down by the hard rocking heroes of old. With a combination of straight-forward choruses of the likes of Dio, guitar works in the style of ‘Maiden or ‘Lizzy on speed and the pounding beat of Judas Priest, Screamer has carved out their very own essence of heavy metal that stands the test of time.

With their latest album, the songwriting has become even more focused and hard hitting. For the first time, the band has been able to build on the last release with an intact set of members. This has really allowed them to build on their strengths and grow as a song writing unit. And, also for the first time, they’ve been working with an external producer, Gustav Hjortsjö from Bullet, who has really helped hone every song to be the best that they can be. Whether it’s the brutal “Halo”, the sing along friendly “Out of the Dark” or the anthem-like title track “Highway of Heroes”, all songs truly carry their own weight and together they fulfill the bands goal and war cry for this album; “All hits, no fillers”!

Still, they are not done yet by a long shot! Having previously released the albums Adrenaline Distractions (2011), Phoenix (2013) and Hell Machine (2017) on High Roller Records, they have now decided to switch to The Sign Records for the latest album to get the ball rolling even faster!

So grab a cold one, crank the stereo to eleven and join Screamer on an epic journey down the “Highway of Heroes”!”

Screamer‘s “Out of The Dark” video: