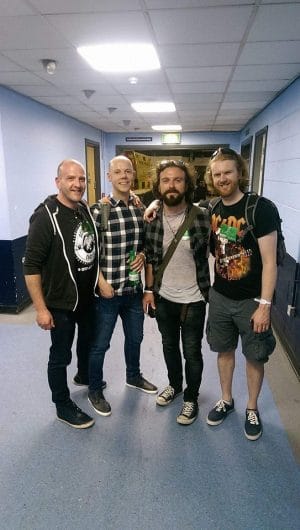 “Hey guys! As some of you know I’m extremely picky when it comes to singers.
It has to be something special for me to get “that” feeling.
Chris Fry of Screaming Eagles is a singer that gives me “that” feeling, so when he asked if I wanted to do a duet on the classic INXS/Jimmy Barnes hit, I was all game!
Have a listen & by god don’t forget to have a good time!!”

Sleaze Roxx stated the following in its review of the Screaming Eagles‘ last studio album Stand Up And Be Counted, which was released last summer: “The positive — but also perhaps somewhat negative — feature of taking over the running of an established site such as Sleaze Roxx is that all of a sudden you get flooded with music to listen to. That is why it is so nice when you are able to put on a CD for the first time and know that you are going to like it — and perhaps even love — what the artist has to offer within a few seconds of the first track. Screaming Eagles‘ sophomore effort Stand Up And Be Counted did exactly that. Within a few seconds of hearing the opening track “Ready For The Fall”, I knew that I was really going to like Screaming Eagles‘ new album. It is really very difficult not to like Screaming Eagles. The Northern Ireland based rockers simply play straight up no bullshit rock and roll and they do it really well!”