Screaming Eagles release new video for “Breakin’ All The Rules”

Northern Ireland rockers, Screaming Eagles, have released a new video for their song “Breakin’ All The Rules” from their new album Stand Up And Be Counted. 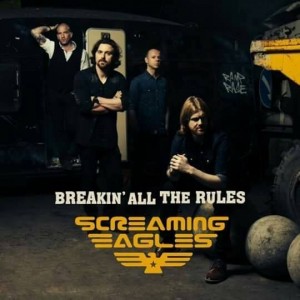 Sleaze Roxx recently had the opportunity to interview the four band members that comprise Screaming Eagles to talk about the new album and new video for “Breakin’ All The Rules.” Screaming Eagles‘ lead vocalist, Chris Fry, commented on who came up with and what was the idea behind the video: “It was an idea that came up from a lot of ideas we threw around between us. We always try to make fun and interesting videos and hopefully that’s what will come across. The storyline was changing right up until the day of the shoot but the core of the video never really changed. The idea is of a Reservoir Dogs-esque scenario with a Mr. Big and some low-life gangsters (i.e. the band!). We got an actor/friend of ours called Graeme Woodcock to feature in the video and bring an extra dimension to it, which really worked in the end. It was shot in an old warehouse in an area of Belfast where the Titanic was built. It has a massive indoor space and was freezing cold — perfect conditions! One of the guys at the warehouse had an old 1960s American car, which we were able to use as a backdrop to the performance footage. When he started it up, we nearly suffocated from the fumes! We worked with Phil Matier and Tristan Crowe who did the video for “Save Me” a few months back — very talented guys.”

Fry also explained how the band ended up choosing “Breakin’ All The Rules” as the next song off Stand Up And Be Counted to get the video treatment: “We’d originally planned to have “Breakin’ All The Rules” as our first release off Stand Up And Be Counted as we thought it had real potential as a single, but after some deliberation we decided to go for “Save Me”, as it represented the album a bit more. So “Breakin’” was the logical choice for the next single as it shows a totally different dimension to our sound in terms of vocal harmonies. It’s a great rock n’ roll song with a straight ahead beat. We experimented with some different guitars and it came out really well. We’re really proud of it. In fact, it was one of the last songs we wrote in the weeks running up to the recording and we didn’t know if it would cut the mustard in the end. We were proved wrong.”

Finally, Fry commented in the Sleaze Roxx interview about the Screaming Eagles using humour in their videos: “We’re a fun lovin’ bunch of guys and I think that always comes across, not just in the videos, but hopefully in our live performances too. We’re not exactly four [Robert] De Niro’s so you ain’t gonna get too many decent dramatic performances in…. And as long as I get my bottle of Buckfast in, I’ll be happy! We see too many videos that are just performance based, which in truth gets quite boring after a while. So we try and mix it up a bit. We are always up for a bit of acting but I have to say that some us just ain’t cut out for it [laughs]. Check out Adrian [McAleenan]’s acting in the “Rock N’ Roll Soul” video [laughs]! The hard part is coming up with an idea or a story for the video. It doesn’t necessarily have to link up to the song’s lyrics — just look good visually and be interesting. It’s usually Kyle [Cruikshank] who brainstorms all the ideas for the videos. I sometimes wonder where he got the idea for robbing banks and fire breathing transvestites…”

‘Breakin’ All The Rules’ written by McAleenan/Fry/Lilly/CruikshankFrom the album STAND UP AND BE COUNTED.Featuring Graeme Woodcock as “Mr Big”Thanks to the “…