Northern Ireland hard rockers, Screaming Eagles, will be releasing a second video in support of their new album Stand Up And Be Counted.

After the song “Save Me” off Stand Up And Be Counted received the video treatment, it is now the turn of the track “Breakin’ All The Rules” to be released on video. 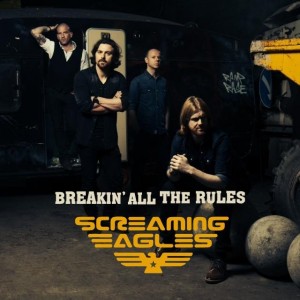 Sleaze Roxx stated the following in its review of Stand Up And Be Counted: “It is really very difficult not to like Screaming Eagles. The Northern Ireland based rockers simply play straight up no bullshit rock and roll and they do it really well! After listening to Stand Up And Be Counted, all I was thinking is who are these guys and how come I don’t know more about them? Upon checking YouTube, I realized that I had previously come across the band’s video “Rock N Roll Soul” from their debut record From The Flames. I also remembered reading my predecessor Skid’s review of that album and no need to say that Skid loved the band’s debut record. I can’t remember why I did not end up picking up the Screaming Eagles‘ first album because if the tracks are anything close to “Rock N Roll Soul” — and I understand that they are — that would be an amazing record! In addition, Stand Up And Be Counted is the type of album that is so good that not only will you want to snatch yourself a copy of that record but you’ll also want to obtain whatever else the Northern Ireland rockers have to offer.”