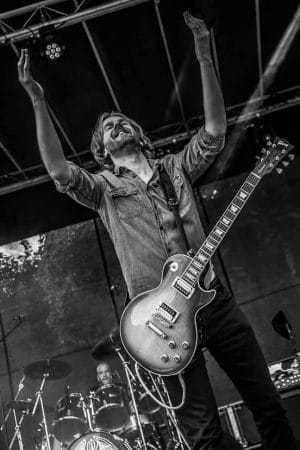 Great news for Screaming Eagles fans as the Northern Ireland hard rockers will be recording their third studio album in early 2017.

The Screaming Eagles have released two albums to date: From The Flames (2012) and Stand Up And Be Counted (2015).

Sleaze Roxx stated the following in its review of From The Flames: “Who the hell are the Screaming Eagles and why didn’t anyone previously contact me about them? The reason I ask is because their debut album From The Flames is absolutely killer, and likely would have made it onto my top 10 of 2012. Apparently the Screaming Eagles are a new band from Northern Ireland that some people are comparing them to AC/DC, but their music is way too sophisticated for such a generalization. Sure they have a similar energy, but think more along the lines of Buckcherry sleaze, Little Caesar blues and Bad Company during their ’70s heyday. That recipe looks good on paper but it sounds even better spread across ten scorching hard rock tracks.”

With respect to the Screaming Eagles‘ sophomore effort Stand Up And Be Counted, Sleaze Roxx stated in its review: “Screaming Eagles remind me of a cross between well known Aussie rockers Airbourne and lesser known Canadian rockers Last Bullet (only when the latter plays hard rocking tunes on their Love.Lust.Illusion. album). Great yet simple guitar riffs from Adrian McAleenan, the raspy vocals of Chris Fry and the thunderous rhythm section of bassist Ryan Lilly and drummer Kyle Cruikshank combine to make one unbelievably good rock and roll album in Stand Up And Be Counted. The first few tracks are off the charts.”