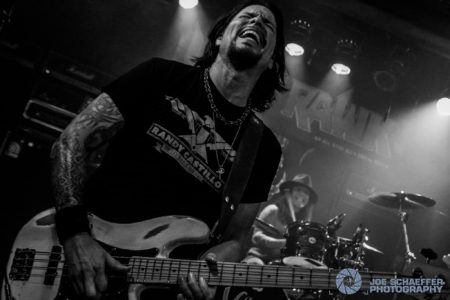 In terms of his departure from Great White, McNabb indicated (as transcribed by the Chuck Shute Podcast with slight edits):

“You know, my addiction, you know, from there kept kind of ramping up and you know, the cocaine and the alcohol and all that really ramped up for me and it started to get out of control. And I got fired from the band towards the end of addiction… And that was not easy because, I’ve been in the band for a long time. And that didn’t help. But then they had asked me, someone from management company called up and said, ‘Hey, you want to go out and do this tour? And here’s what we can pay you.’ And I’m like, ‘Wait a minute, I used to be a member of this band and a member of the corporation. That’s what you’re going to offer me to go back out? No, thanks. I’m not going to do it.’ And two and a half weeks later, that happens….  So I think somebody was looking out for me. And it was a horrible tragedy that happened that shouldn’t have happened and of course nobody went there to hurt anybody. Just a [inaudible] set of circumstances, that kind of was it.

In regard to whether it was common to use pyrotechnic pyrotechnics in small clubs back then, McNabb stated: “We never did you know. We never did. And I had played that club many times. And there was a lot of foam on the walls for sound because the neighbors bigger stuff about town. And I guess the adhesive that they had stuck all that onwards was highly flammable. So that what was the deal with that but like you said, I almost kind of took Great White off my resume for a long time because every time that would come up, someone would ask me about the tragedy in the fire and I just felt so bad about it… I lost friends there. And I kind of had to just let that go and you know, it’s a horrible tragedy…”

You can listen to the interview with Sean McNabb by Chuck Shute for the Chuck Shute Podcast at Buzz Sprout‘s website.

Wikipedia states the following in part about the Station Nightclub fire (with slight edits):

“The band returned to the national spotlight on 20 February 2003. At the beginning of a Great White performance at The Station Night Club in Rhode Island, pyrotechnics used by the band’s crew created a spray of sparks that ignited the foam soundproofing material in the ceiling around the stage. One hundred people, including guitarist Ty Longley, died in the fire that followed. Approximately 115 survivors were badly burned, maimed and permanently disfigured.

In 2008, Jack Russell Touring Inc., agreed to pay $1 million to survivors and victims’ relatives of the fire while admitting to no wrongdoing. This amount also covers former tour manager Daniel Biechele along with the band members, record label, and management as it existed at the time of the fire. The settlement was the maximum allowed under the band’s insurance plan. On the two-year anniversary of the fire, Jack Russell and Mark Kendall, along with Jack Russell‘s attorney, Ed McPherson, appeared on Larry King Live with three of the victims of the fire and the father of Ty Longley, to discuss some of the healing that had taken place over the previous two years and some of the permanent scars that remained. Victims had previously received $3.8 million raised by United Way of America.

Though the media referred to the band as “Great White” following the tragedy in Rhode Island, the band was officially performing under the moniker of “Jack Russell’s Great White” at the time of the incident. Prior to the fire, the band’s official website posted a message stating that Great White had not re-formed. It’s unclear when the band began officially going by “Great White” again.”