Season 2 of TrunkFest on AXS TV featuring radio and television mogul Eddie Trunk will be premiering on July 7, 2019 at 9:30 pm EST.

“Music historian Eddie Trunk takes viewers on an immersive journey through some of the country’s biggest rock festivals and music events, as the popular AXS TV original series TrunkFest returns for season two—premiering Sunday, July 7 at 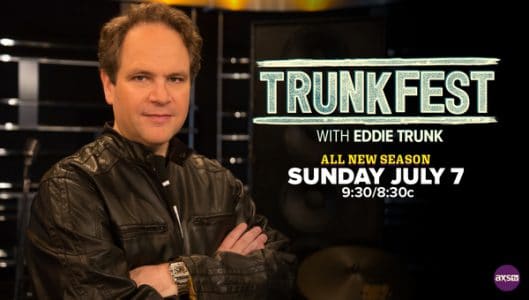 TrunkFest Season Two kicks off on July 7 with a trip down to sunny southern California for a day of classic rock and classic rides at Sammy Hagar’s High Tide Beach Party And Car Show. While there, Eddie Trunk takes in the sights and sounds of the summer’s ultimate beach bash, and sits down with a slate of rock n’ roll icons such as Eddie Money, Vince Neil, REO Speedwagon, and the Red Rocker himself, Sammy Hagar. Check out the first look clip here from the premiere.

Trunk has also been added to this summer’s lineup of Sammy Hagar’s High Tide Beach Party on September 28 and 29 in Huntington Beach, CA. For more information, click here.

Also during the season, Trunk boards the Monsters Of Rock Cruise to sail the high seas with Tesla and Extreme (July 14); saddles up for a Country Jam weekend packed with tricked-out RVs and trailers, and interviews with Country stars Jon Pardi and Craig Campbell (July 21); chills out at Vail Snow Days with Nathaniel Rateliff & The Night Sweats, and hits the 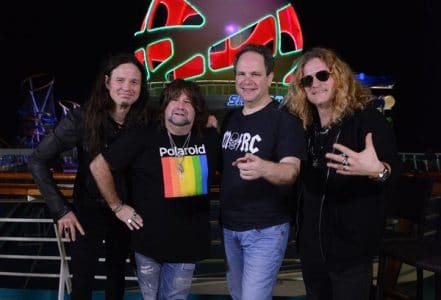 slopes on a ski-lift with talented rock progeny Devon Allman and Duane Betts (July 28); lives the life of a Super VIP at the Hangout Music Festival, joining Judah & The Lion and lovelytheband on the Gulf Shores (Aug. 4); and heads to the world-famous NAMM festival to talk with six-string superstars Dave Amato and Vivian Campbell, and checks out the latest top-of-the-line music gear (Aug. 11). Other highlights include a celebration of the 50 th anniversary of Woodstock (Aug. 18); trips to Rock N Roll Fantasy Camp (Aug. 25) and INKcarceration (Sept. 1); and a special recap reflecting on “The Best” moments of the year (Sept. 8).

“One of the things I’m really excited about with Season Two is the growth and variety of events and experiences we cover. I am literally learning and experiencing many things right along with the audience for the first time,” said Trunk. “It’s been awesome and at times an education for sure!”

“The response to TrunkFest’s first season from our viewers was incredible. Our audience loved Trunk’s inside views of festivals and how he experienced them firsthand,” said Evan Haiman, AXS TV’s Vice President of Music Programming and Production. “We’re proud to give our viewers even more epic interviews and in-depth festival coverage in season two. Eddie Trunk is beloved by fans and artists, alike, and his knowledge of music is unparalleled—I couldn’t think of a better host, or a better series, to serve as one of the cornerstones for our new Sunday Night Rocks block.””