In a rather strange exchange on Twitter, 49 year old Fozzy frontman and current AEW wrestling superstar Chris Jericho has challenged 52 year old and former Skid Row frontman Sebastian Bach to a “sing off.” Interestingly, Bach has publicly accepted the challenge (see screen shots of Twitter posts below) so we will have to wait and see whether it happens at a later date.

The following are excerpts of an article posted by Sleaze Roxx contributor James Walsh on his website WrestlingEpicenter.com on July 16, 2020:

“Those long haired Canadian rock and rollers are at it again!

AEW‘s Chris Jericho and former lead vocalist of Skid Row Sebastian Bach got into a heated exchange on Twitter yesterday. Jericho was looking a little bit like Sebastian Bach on AEW Dynamite last night which someone posted about on Twitter including tags to both men. Bach said he gets it a lot and Jericho joked that good looking guys look alike. But, it broke down in Tulsa… Or, Jacksonville… Or, on Twitter, I guess, from there.

However it devolved from there, as Bach accused Jericho of not actually singing his songs as part of the band Fozzy.

He wrote: “He definitely does considering that he mimes to a tape.”

Jericho replied: “I sing my ass off every night dude. Do you really wanna go there? Wow! My band is more popular than @sebastianbach !!”

It only continued from there, with Jericho at one point refusing to let it go and challenging Bach to a ‘sing off’.

He added: “Hi… I’m Chris “Milli Vanilli” Jericho. I have 5 top 30 singles in the last five years w my band @FOZZYROCK. I’m a huge fan of @sebastianbach … who had 3 top 30 singles 30 years ago. I always admired him as a singer and a friend! And I still do. I’ve seen the derogatory comments towards me from somebody I considered to be a friend. So with that in mind, I’ll be happy to have a SING OFF w @sebastianbach! No effects, no tuning, no bullshit. Bas is a great singer…but I’m better. You’ve got my number dude. Call me. I’ve never mimed anything ever! And I don’t use *** in a tweet ever. I will f***ing sing in your face anytime, anyplace dude. I’ve been a fan & a defender of u since day one…but don’t u ever question my rock abilities! And leave wrestling out of this…I can hit a G4 brah!”” 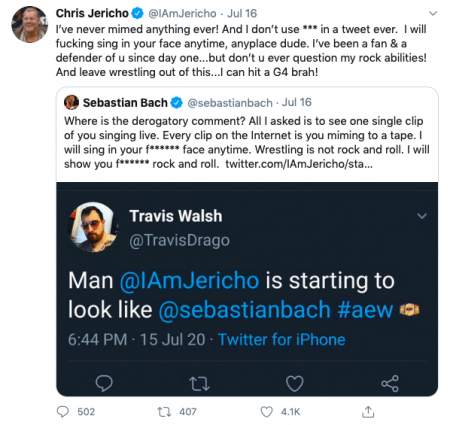 You can read the rest of the article at WrestlingEpicenter.com with Walsh‘s thoughts on which singer sold the most albums even after taking into account the modern era of digital downloads. 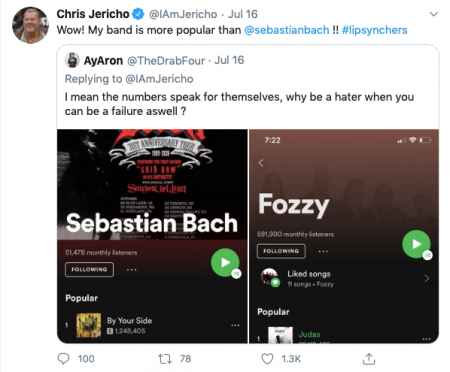 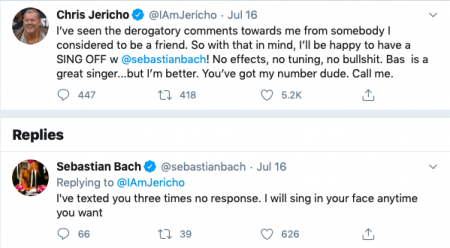 Bach‘s discography includes three full-length studio albums with Skid Row consisting of Skid Row (1989), Slave To The Grind (1991) and Subhuman Race (1995) along with three solo studio records consisting of Angel Down (2007), Kicking & Screaming (2011) and Give ‘Em Hell (2014). Wikipedia indicates that the Skid Row album is certified as a five-time platinum record in Canada and the United States of America while Slave To The Grind was certified platinum in Canada and double platinum in the USA.