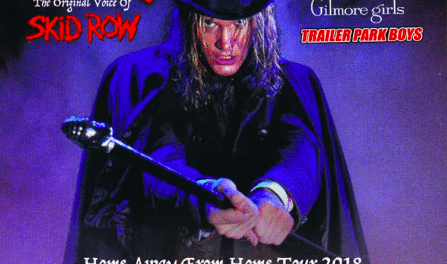 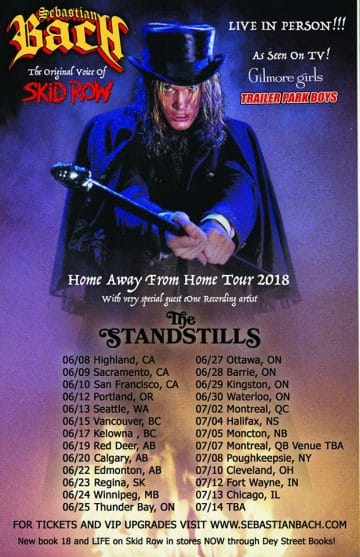 Former Skid Row frontman Sebastian Bach has announced a North American tour dubbed the Home Away From Home Tour 2018 with The Standstills as the official opening act. The 26 tour dates include 16 stops throughout Canada including the singer’s apparent first time playing in Waterloo, Ontario.

Sleaze Roxx stated the following in its review of Bach‘s last Toronto stop back in November 2016: “Say what you will, Sebastian Bach will go down as one of the all-time great frontmen in terms of hard rock/heavy metal bands. Sure, he sometimes goes off the deep end — or at the very least is short-tempered — as he showed the previous time he played Toronto in December 2014 when he felt someone pushed his mother who was standing in the general admission area, but whatever the case, he has tons of charisma, confidence and is able to connect with an audience one way or another….

Bach just recently posted the following message on his Facebook page yesterday, which gives you an idea of what his show at The Opera House in Toronto meant to him: “Hello Toronto. I just have to say how much last night meant to us. Us as a band & crew, my friends, my family, the whole last 30 years rolled up into one last night at the Opera House. I was very touched by the passionate crowd! You guys really came out in force on a cold Tuesday night and made us all feel very welcome back home. It was very special for me to be doing a show on Queen Street where I used to hang out so many years ago. Toronto will always feel like hometown to me and I feel like I knew every single person there in the crowd last night. This is the end of a very long and grueling tour and to have Toronto be such a great kick ass show and the end of all these weeks on the road really meant everything to me. Thank you all for such a memorable evening and we will see you real soon! Check out my book in stores December 6 across Canada !!!!!” Of course, being the master promoter, he threw in something about his new book 18 And Life On Skid Row, which is scheduled for release in less than two weeks! You got to love it!”