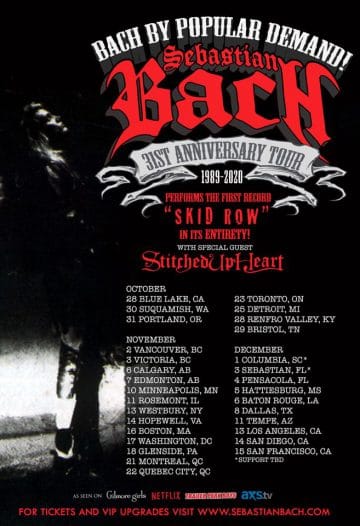 Former Skid Row frontman Sebastian Bach has had to reschedule his spring tour dates for his second leg of his 30th Anniversary Tour throughout North America to celebrate Skid Row‘s debut self-titled album.

“Sebastian Bach has announced the newly rescheduled dates for the 2nd leg of the 30th Anniversary Tour celebrating the 1st album Skid Row.

The tour will now take place this fall starting on October 28th and run through December 15th with special guests Stitched Up Heart.

All dates have been rescheduled and tickets and VIP upgrades previously purchased will be honored at the newly scheduled dates, with the exception of Regina, SK, Uncasville, CT and Roanoke, VA due to venue availability. Fans who purchased tickets and VIP upgrades for those 3 shows will need to contact their point of purchase for refunds. Until then, stay healthy and safe!