It is no secret that Sebastian Bach is a huge KISS fan. One just has to read his autobiography 18 And Life On Skid Row to get an idea in that regard. Bach attended KISS‘ End of the Road World Tour stop at the Honda Center in Anaheim, California, USA on February 12, 2019 and had some wonderful things to say about the concert.

“Happy Valentine’s day to the love of my life Suzanne! You have made my life a dream! Come true! I can’t believe we even got to see KISS together! We all remember our first KISS……. And we’ll never forget the last KISS!!!

The Honda Centre in Anaheim was completely %100 SOLD OUT and what a feeling to share the night with over 18,000 loyal card carrying members of the KISS ARMY. I have been a member of the KISS army since 1978 and I saw my first KISS show in 1979 (as detailed in my book). I have seen them every single tour (I think) since Dynasty and let me tell you something. What they say is true. Good things come to those who wait. The #EndoftheRoad Tour is a culmination of all things KISS; most of all, the undeniable feeling all true KISS fans know all too well when we get to go see KISS in concert. The excitement, the theatrics, the celebration, most of all the music of course. When you have spent this much time with a band in your life, being entertained by them for decades, they become much more than a rock band.

We’ve all lost loved ones. Family members. Parents. But KISS is still here. KISS is on the road now for their last tour. And we are so lucky to be able to see them one last time. I can’t begin to tell you how incredible the show was in Anaheim. This is KISS 2019. I have never seen a stage production like this from any band at any time. They sounded incredible. Gene‘s bass tone was as monstrous as it was on the Alive 2 tour and he played the bass like only he can. Gene Simmons is one of the most underrated bass players in Rock. His fingers were up and down the fretboard all night. I was 5 feet away from the stage and it was all real rock and roll all night. Tommy played all of the classic leads note-for-note and looked completely larger-than-life in his 2019 Spaceman boots and costume. You will be blinded by the mirrors on his chest, even if you are in the back row. Paul Stanley sung his ass off, which is really quite something to say considering he is shaking his ass nonstop for the whole show, in seven inch leather heels, approaching the age of 70. He even hit some super high screams in parts of the songs where he didn’t do that before, pushing the melody lines and reinventing verses that we have all song for all our lives, in new and interesting ways. As an experienced singer does. Much in the way that Rod Stewart sings his hits with new licks, vocal riffs, what Paul and Gene have done with this tour has put them in the league of only a few other artists. Mick Jagger. Keith Richards. Paul McCartney. Ozzy Osbourne. Steven Tyler. Paul and Gene have defied age. Defied time. They are still putting on the most rip-roaring rock show you will ever see. Just like they’ve been doing since 1973. 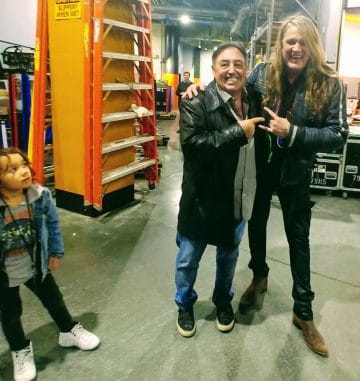 Eric Singer played the drums like a man possessed. His drum solo was one of the coolest I have ever heard. He got the crowd going with his Solo in a very original way and his drum chops were absolutely mesmerizing. When he sang Beth on the piano at the end of the night, his voice was absolutely perfect, and having Gene and Paul and Tommy come out to the piano halfway through the song just added even more to the family vibe of the show. Eric sang and played his ass off.

The setlist was interesting and far from the usual hit parade one might expect on a “last tour”. I was even surprised near the beginning of the show when they did the song Say Yeah, curious to see how that tune would fit with the classic songs from the ’70s. And sure enough, through pure musicianship, this song kicked total ass. Driven by Eric Singer‘s cowbell groove which was undeniable and got the whole 18,000 seat arena locked in. Loved it.

One of the most astonishing aspects of this production is its sheer size. Near the end of the show I was blown away to see part of the stage come from behind me and above me, like some giant tentacle of a robotic arm that I didn’t even see until the end of the show. It’s a mind-blowing stage. One of the lores of KISStory are the 1979 Dynasty ‘lasers’ that didn’t make it to the stage. Well look out, because KISS 2019 is a laser light show that is so massive, you will feel like you are at Laserium even in the back row.

The main feeling of this show at the end of the night, is just like the song says, We are One. What KISS understands that so many other bands do not even grasp, is that great rock and roll, at its core, above + beyond all else, is meant to be fun! We are the KISS Army …. together. And we have been for our whole lives. Just like mom + dad brought us to see KISS in 1979, I took my sons and brothers to the reunion tour in 1996, and now my boys to the End of the Road Tour in 2019. For this alone, I can never thank KISS enough…… For being part of our family. You mean everything to us.

Thanks also to Doc McGhee for his kindness and hospitality. It was so great to see Doc again and have a laugh. I couldn’t believe it when Doc made it a concern of his to take me and Trace to find some headphones, so it wouldn’t be too loud for him. 30 years after doing shows with Doc, he is still looking out my kids welfare. This is what I’m talking about. KISS is family.