How far apart have former Skid Row bandmates Sebastian Bach and Rachel Bolan drifted away over the years? 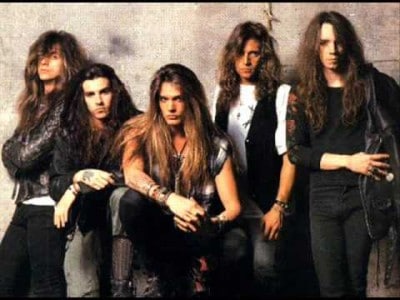 Bach tweeted the following message to Bolan yesterday (as reported by Blabbermouth given that Bach has apparently blocked Sleaze Roxx from his Twitter account dating back to Sleaze Roxx‘s review of Bach‘s last studio album Give ‘Em Hell):

“Weird wishing Happy Birthday to someone I haven’t hung out with in 23 years. But I wish to say HAPPY BIRTHDAY to @rbolanbass because… life is only getting shorter. Thanks for the memories”

Although Bach has publicly expressed how he would be really like to do a reunion with his former Skid Row bandmates, Bolan and guitarist Dave “Snake” Sabo have both expressed their lack of interest in reuniting with the band’s singer who handled the lead vocals on the group’s biggest selling and breakthrough albums, Skid Row (1989) and Slave To The Grind (1991).

The lack of connection between Bach and Bolan seems evident by the fact that Bach sent birthday wishes to Bolan via Twitter even though the latter apparently stopped using Twitter back on July 6, 2018 as the last tweet on the bassist’s Twitter account states: