Former Skid Row lead vocalist Sebastian Bach is apparently quite excited about collaborating with Rush guitarist Alex Lifeson in a video from Bubbles & The Shit Rockers for the song “Who’s Got Yer Belly.” 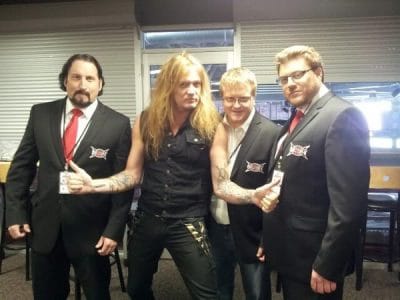 “To collaborate with Mr. Alex Lifeson of RUSH on a musical opus such as this is the realization of a dream ?? Enjoy the Brand New music video “Who’s Got Yer Belly” by Bubbles & the Shit Rockers right here ! Don’t miss Bach on Trailer Park Boys Out of the Park USA on Netflix NOW!!!!”

Wikipedia indicates that Bach has played himself while appearing on two episodes of Trailer Park Boys in 2007 and again in 2014.

Wikipedia also states the following (with slight edits) about Mike Smith who handles the lead vocals for the song “Who’s Got Yer Belly”: “Mike Smith (born August 27, 1972) is a Canadian actor and musician born in New Glasgow, Nova Scotia, and raised in Thorburn. He is best known for his portrayal of “Bubbles” and co-writer of the ongoing cult classic television program, films and stage production Trailer Park Boys….

Smith showed early signs of musical talent, after learning to play the guitar at age six. Before becoming involved in Trailer Park Boys, he was a guitarist in the rock band Sandbox, and signed a record deal with EMI in Canada, and Nettwerk in the United States. Sandbox released two albums with EMI and Nettwerk, entitled Bionic and A Murder in the Glee Club. Sandbox was nominated for a Juno Award, East Coast Music Awards, and a CASBY Award.

Smith has worked on such films as The Weight of Water and Serendipity.

Here comes one of the most DECENT country songs ever to be recorded in the US of fackin’ A!Bubbles and his Shitrockers teamed up with the legendary Rush guit…