Former Skid Row singer Sebastian Bach played the Kallang Theater in Singapore on October 18, 2017 with a setlist heavy on Skid Row material with six songs from the self-titled debut, five tracks from Slave To The Grind and one song from Subhuman Race along with covers from AC/DC, Rush and Painmuseum (with the latter “American Metalhead” appearing on Bach‘s 2007 studio album Angel Down). 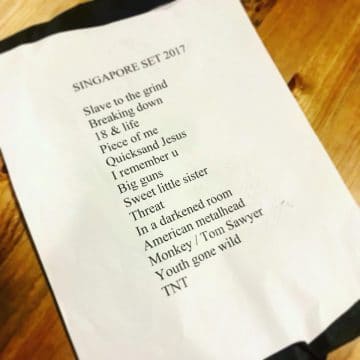 The following message was posted in part on Bach‘s Facebook page back on October 17, 2017:

“Spent yesterday in Singapore fighting some extreme jet lag by going to all the vinyl record shops we could find! Thanks so much to our Promoter Ross for showing us around in our hallucinogenic state! We are so excited to play tonight at the Kallang Theater in Singapore for the first time ever! This place is so clean and the people are so nice it is a great place to live and to visit! No shortage of Skid Row shirts for sale at the mall! Wow!…  @ Kallang Theatre“

Sleaze Roxx noted in its review of Bach‘s performance at the M3 Rock Festival back in 2014: “Bach displayed a lot of attitude, which was entertaining to see, and made me laugh at times — but it sometimes bordered on arrogance. For instance, he advised that he had been interviewed by “some guy” who asked him what was the difference between the state of metal in general between now and back in metal’s ’80s heyday. Bach‘s response was that they had sold out the Merriweather in 1989 and did it again in 2014, implying that there was essentially no difference between the eras. Do you really believe that Sebastian? If he truly did, he most likely would not have told the M3 audience that, “It is OK to like a new song!” after receiving a not overly enthusiastic response at the end of playing his new song “All My Friends Are Dead”. I’m pretty sure Bach did not have to say such a thing to an audience during the time that Skid Row released their first two records and performed new songs.”

Sebastian Bach performing “Quicksand Jesus” and “I Remember You” live at Kalland Theater in Singapore on October 18, 2017: