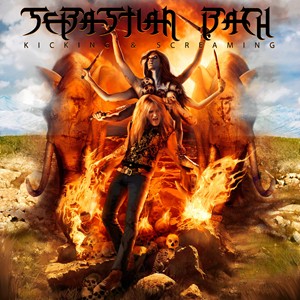 Here it is, the official track listing and cover art for Sebastian Bach’s new solo album ‘Kicking & Screaming’! The first single from the album will be the title track, “Kicking & Screaming”; look for it to impact at radio in mid-August.

Sebastian Bach has sold in excess of 20 million records worldwide as lead singer with his former band, Skid Row and as a solo artist. Far from just being a multi-platinum recording artist, the singer/songwriter/actor/entertainer has expanded his career over the past decade to include episodic television with a 5-season recurring role on the CW’s hit series “Gilmore Girls”, starring roles on Broadway (“Jekyll & Hyde”, “The Rocky Horror Picture Show”) and national touring companies (“Jesus Christ Superstar”), and has appeared regularly on MTV and VH1.

Bonus tracks:
1. Jumpin’ Off The Wagon – only available on the physical CD/DVD editions
2. Ain’t There Yet – iTunes exclusive