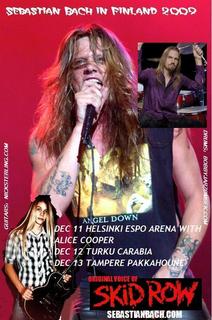 Sebastian Bach, who is opening select shows for Alice Cooper, has issued the following update:

First let me say thank you so much to all the musicians who sent in demo packages & emailed mp3’s & pictures, thanks so much. It’s really hard for me to replace band members after spending years on the road with the same guys. I don’t look forward to it, but I am very lucky to have so many guitar & bass players who want to jam . I have every one of your packages & emails saved in case I gotta go through this again!

After searching for ‘my Randy Rhoads’ for the last couple of decades, I am very excited to introduce to you a guitar player whom I feel has what it takes to take on the world of rock n’ roll & beyond …. Ladies & Gentlemen, please put your hands together for ….. Mr. Nick Sterling ! After flipping through a recent issue of Guitar World Magazine (good place to find guitar players it turns out!) I saw an ad for an amplifier that featured Nick Sterling. After I found Nick’s websites, I could not beleive how talented this guy was… he sings, plays all guitars & basses, & all the drums on his recordings! Now that’s something I know very few people are capable of. His songs rock, he plays great… I was very interested in making some music with this dude. I contacted him through his myspace page, & soon we were emailing song ideas back & forth. Now, a month or 2 after our initial contact, I am proud to say we currently have 2 demo songs recorded, & are about to start on our third. Nick is younger than I am. The reason I dig his tunes is that, to me, rock n’ roll is all about the spirit of the Youth Gone Wild, & honestly some musicians as they get older tend to ‘write older’. I am simply far too in love with rock n’ roll, still, to change my ‘musical direction’ right now. I just want to keep making albums that have tons of energy , are melodic, cool , groovin’, & fit into the catalog of what I have put out so far. Nick’s songs & vibe fit perfectly along side such tracks as ‘Youth Gone Wild’ ’18 & Life’ etc.

Now that we have got some songs together, it’s time to get back out on the road! We have been asked to play in Helsinki Finland with the Legendary ALICE COOPER on December 11 ! I am so very excited to rock again! I love ALICE & I can’t wait to do a show with the man. We will also be headlining Turku Finland December 12 at Caribia & Tampere Finland December 13 at Pakkahoune. We are trying to finalize a gig on Dec. 8 or 9 in Budapest Hungary, there will possibly be more gigs as well! We will do all the Classic Skid Row tunes you know & love, along with ‘Angel Down’ tracks & some brand new ones you have never heard before! This will be Nick’s first ever trip to Europe, so hey give him a warm welcome, he is gonna need it coming from Arizona to Finland in December ! Brrrr!!

Joining us on drums & bass are Bobby Jarzombek & Rob DeLuca. It’s great to have players who stick with me, through it all, in this crazy business. Such dedicated & professional players as Bobby & Rob are hard to come by & I consider myself fortunate to share stages around the world with these cats, going on 5 years now. On 2nd guitar will be eitherJohnny Chromatic or Charlie Bellmore. I have a bunch of new music with Charlie Bellmore that I am dying for you all to hear, but Johnny has done the set hundreds of times so it might be better to have just one new guitar player live instead of 2. But Johnny is very busy with his band down in Florida, so I am still undecided on who take to Finland on 2nd guitar. Both Johnny & Charlie shred like cheese graters, so don’t worry our band will kick your ass Finland! Get ready!

As soon as we get back from Europe it’s full speed ahead on the new CD ! We have at least 12 songs ready to record & we are not stopping the writing process. We plan on starting to record the next record as soon as we can. Also look out for the 1st ever Sebastian Bach Blu-Ray coming your way soon (also to be released on DVD)! Details ASAP! Watch this space!