Sebastian Bach vs Michael Sweet — the war of words…

A rather surprising “feud” has emerged between two of the greatest frontmen of ’80s hair metal era bands as Stryper frontman Michael Sweet and former Skid Row singer Sebastian Bach are trading verbal salvos at each other.

Perhaps the most astonishing part of the Bach vs Sweet feud is that the latter was first considering working as a producer for Bach‘s new record at the request of reportedly Bach‘s label before things took a turn for the worse.

The following are excerpts from an article from Blabbermouth earlier yesterday:

“Sebastian Bach has accused Michael Sweet of having “a big fucking mouth” after the STRYPER frontman said a teenage female singer “smoked” Bach with her version of a classic SKID ROW song.

The latest war of words began when Sweet shared a video on Facebook of 16-year-old emerging artist Moriah Formica perfoming the SKID ROW track “I Remember You”, along with the caption: “Moriah Formica kills this and in my humble opinion, smokes the original singer.”

After a Twitter user posted a screenshot of Sweet‘s post and included the message, “Michael Sweet posts video to FB of 15 yo girl singing ‘I Remember You’ Calls @sebastianbach a ‘tool’ in the process,” the former SKID ROW vocalist fired back, writing in a tweet: “Michael Sweet has a big fucking mouth. Behind a keyboard that is. Can’t wait to see this pussy in person again someday.”

Bach and Sweet previously traded barbs nearly two years ago when Sweet claimed he was asked to produce a Bach solo album, only for those plans to be squashed because Sebastian couldn’t make up his mind. Sweet said: “I was approached to do a Sebastian album… to produce it and to co-write with him and basically try to kind of go back to those powerful songs from the past. Not make a dated record, but just that style, the anthemy SKID ROW stuff that everybody loves. And that was the plan.” He continued: “Management got involved, and Sebastian and I e-mailed each other back and forth. It was going down the track a little ways and all of a sudden it came to a screeching halt. He decided he wanted to do an acoustic album, or wanted to do this, or wanted to do that. And I was just, like, ‘Guys, let me know what’s going on, if it’s going on.’ And I never really heard any more about it, so I guess it’s not happening. But it would have been cool.”

Michael also offered a theory as to why so few of Bach‘s 800,000 Facebook followers purchased the former SKID ROW singer’s latest solo album, “Give ‘Em Hell“, when it was first released. Sweet told Trunk: “This isn’t a bash against Sebastian at all; it’s just my opinion. I think people wanna hear Sebastian of old. They wanna hear the SKID ROW Sebastian. They wanna hear the hits. And he’s giving them modern rock. It’s [‘Give ‘Em Hell‘] a good album, it’s a good-sounding album, but it’s not the glory days.” 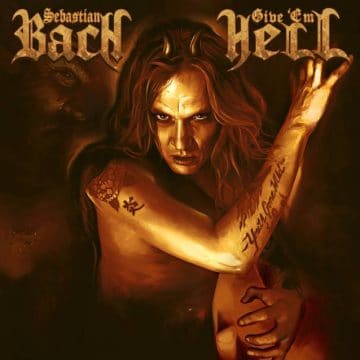 Interestingly, Sleaze Roxx echoed the same thoughts as Sweet when it came time to review Bach‘s last studio album Give ‘Em Hell released back in 2014: “Good, but nothing spectacular — that is my assessment in a nutshell of former Skid Row frontman Sebastian Bach‘s latest album Give ‘Em Hell. Unfortunately, the hype leading up to this release does not match what is actually being offered by Bach. It is not that the songs are terrible by any means, it is simply that there is nothing that really stands out.

Bach‘s trademark voice is on display, and frankly, he sounds good on Give ‘Em Hell. Bach sings clearly, and somewhat slowly, for the most part and lets out a few signature yells throughout most songs. Apparently, this is the singer’s first record he recorded while sober, and the result seems to be a higher pitched voice than what he has sounded like in the past.

One annoying feature for half of the songs on Give ‘Em Hell is new guitarist Devin Bronson‘s, at times, horrible sounding industrial influenced guitar ‘riffs’ — if you can call it that. The terrible sounding riffs are prevalent during the first few seconds of “Taking Back Tomorrow”, “Dominator”, “Temptation” and “Hell Inside My Head”, before those tunes launch into something listenable.”

Sweet responded to the Blabbermouth article with the following message posted on his Facebook page yesterday:

“Well, since it’s been turned into a public bash, here’s my side:

A while back I was asked by the label (Frontiers) to produce a SB album. I spoke to SB‘s manager and we were discussing possibilities. After a few emails back and fourth SB decided to do something else.

I was then asked about this in an interview with Eddie Trunk and I shared (respectfully) what had transpired. Later that evening, SB tweeted and emailed me and said “shut your mouth or I’ll shut it for you.” He also said not to “ever let his name come out of my mouth again” in an email.

I emailed him to make amends and explain yet to no avail. I’d be a liar if I said it didn’t bother me. It did. I’ve got nothing against Sebastian. I don’t even know him and he doesn’t know me.

Fast forward to Moriah Formica opening for Stryper and blowing everyone’s minds with her talent and voice on a cover of “I’ll Remember You”. I posted it and took a little grief for saying “she smokes the original singer”. I must admit that that comment was made based on my opinion as well as my experience with SB. I then commented on a post and referred to SB as a “tool” based on what had transpired between us a few months back. I suppose I shouldn’t have said that. I’ll admit to my mistakes and apologize if need be.

He sent me an email again basically stating to “be prepared next time we meet face to face.” along with a few other nice gestures. I sent him an email basically saying “let’s get along and move on”.

I have yet to hear from SB.

Anyone who’s knows me knows that I express my opinion and I’m more than willing to back it up. I do my best to be honest yet not to be mean spirited or destructive.

I’m also no pussy. Obviously SB doesn’t know me because if he did, he’d know that as fact?

Since we’re both adults, should we not take the higher road here?

In a perfect world, that would be the right thing to do☝️

Unfortunately I think because I’m a Christian some people think that I’m supposed to “turn the other cheek” and let people say and do what ever they want. I guess the “pussy” in me won’t let me do that.

Thanks for listening and my sincere apologies if I’ve offended anyone and please know that was not my intention. I’ll try a little harder next time?