Former Skid Row frontman Sebastian Bach will be continuing to work on new music while the second leg of his successful 30th Anniversary Tour (to celebrate Skid Row‘s debut self-titled album) from March 25th to May 11th has been postponed. Bach‘s last studio album Give ‘Em Hell dates back to April 2014. 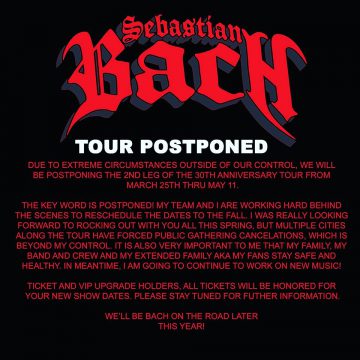 The following message was posted on Bach‘s Facebook page yesterday:

“Due to extreme circumstances outside of our control, we will be postponing the 2nd leg of the 30th Anniversary tour from March 25th thru May 11. ?

The key word here is POSTPONED! Team Baz and I are working hard behind the scenes to reschedule the dates to the fall. We were really looking forward to rocking out with you all this spring, but multiple cities along the tour have forced public gathering cancelations, which is beyond our control. It is also VERY important that our families, my band and crew and my extended family AKA all of you rock fans stay safe and healthy. In the meantime, I am going to continue to work on new music! Tickets and VIP upgrade holders, all tickets will be honored for your new show dates!! Please stay tuned for further information.

We’ll be BACH on the road later this year!”

Sleaze Roxx stated the following in its review of Give ‘Em Hell: “If you are looking for similar sounding follow-ups to Skid Row‘s first two stellar albums, you won’t find it with Give ‘Em Hell. However, if you’re looking for a solid metal record, Give ‘Em Hell delivers the goods for the most part. I think that with a different guitarist, such as a George Lynch or Reb Beach — or simply a better sounding guitar sound — Give ‘Em Hell had the potential to be a lot better.”