Former Skid Row frontman Sebastian Bach is getting closer to releasing the follow up to his 2014 solo album Give ‘Em Hell. 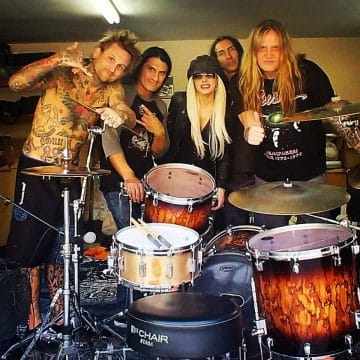 “The internet is neat to send ideas back and forth for musicians to see how they sound. But there is no replacing getting players in a room, together, bashing out ideas and getting some real human chemistry going. This is how we created the albums Skid Row, Slave to the Grind & Angel Down, and this is how we are creating my new record. I could not be happier with the results!!

I am so fortunate to be surrounded by the best musicians on the planet. We now have at least eight songs on the go for the next album. The players on the next album will include, once again, John 5, Steve Stevens, & Devin Bronson, also Orianthi, Brent Woods, & Eli Santana on guitars. These are the people I have been writing with and this album is shaping up to be a kick in the ass for sure. Yesterday’s session was so much fun with Orianthi, what a talented guitar player and writer she fit right into the band! Jeremy Colson on drums is an absolute animal and figuring out parts with him is fun easy creative and the energy on these tracks = music that you can FEEL!

We are about to sign the new record deal and could not be more excited!! New label info TBA very soon!! New Bach album coming your way!! #BachInStudio #demos“