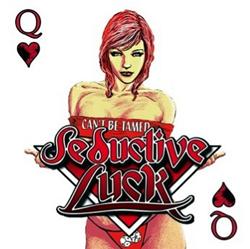 You asked for it and we’ve got it! One of our most demanded releases of the year has finally arrived! New York’s hair metal bad boys: SEDUCTIVE LUCK have released their collective works!

With the release of ‘Can’t Be Tamed’ Seductive Luck have teamed up with Demon Doll Records to bring their entire 18 song collection to the masses – and the masses they should follow. These guys drop the hair metal hammer down with pure melodies and hooks that will keep this CD in your players for years to come. Mix together a little Firehouse with a dash of Bon Jovi, Blue Murder and Danger Danger and you might start to get a sense of what a great cocktail is coming your way.

With the drop dead tracks “Hate And Soul” “Can’t Be Tamed”, “T.V. Babies” and “Suddenly”, you’ll be hearkened back to the 80’s and early 90’s where the boys built their name and gained much notoriety for touring the east coast with such great bands as White Lion, Extreme, Faster Pussycat and Autograph.

All 18 songs from ‘Can’t Be Tamed’ have been digitally remastered and restored. This album is sliver pressed and officially licensed from the band. This is Hair Metal magic! A pure treasure that every fan should own, so grab your copy today at www.demondollrecords.com/Seductive_Luck_-_Cant_Be_Tamed.html!

We are offering this record for a low introductory price of $15.99 for the first 2 weeks of release!