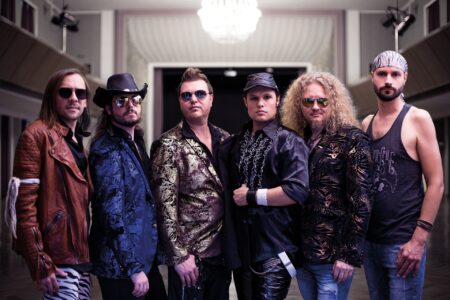 “Sergeant Steel are back with new music. Their first new material in five years is a digital single/music video titled “Fight Fire With Fire”.

The band’s last release featuring self-composed songs was “Riders Of The Worm” in 2015. The full-length record came out world-wide via Boyz Tyme Records. Since the beginning of this year, a yet untitled album is in the box. Huge parts of it were completed once again by Michael Wagener (Metallica, Ozzy Osbourne, Skid Row, etc.) in Nashville, Tennessee. The single “Fight Fire With Fire” should be a test for the release of further material. Like a lot of other artists, Sergeant Steel haven’t published any music during a global pandemic until now. If the song gets the anticipated response, more music should be available by the beginning of 2021.

Songwriter/lyricist Jack Power about “Fight Fire With Fire”: “We are living in times of constant escalation. We lose ourselves in social media, although countless people feel more lonely and misunderstood than ever before. News are full of enraged protesters, authoritarian political leaders and religious extremists. Sergeant Steel are very concerned about those circumstances, and this title is our statement!””