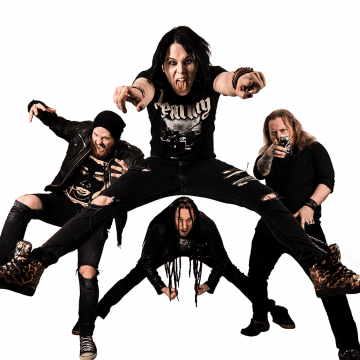 “Shakedown Suzies was formed in Jönköping, Sweden, 2009 by Ricki and Jon (The Embodied). They had an idea of creating a band heavily influenced by Mötorhead, Guns N’ Roses, Hardcore Superstar, etc. A vision of music for heavy metal / hard rock pre-parties – beer anthems.

Songs were written and band members were recruited. In the summer of 2009, the Suzies recorded five songs and celebrated the release by supporting Babylon Bombs at a packed Akademien in Jönköping.

“When we write songs, Jon and I, we ask ourselves ‘What would Lemmy / God do? What would Gn’R back in ’87 do?’ and try to come as close to that raw feeling and energy as we can. But we’re still very influenced by the new scene and bands such as Hardcore Superstar. So the result becomes pretty special and probably not sounding anything like our heroes. But as long as it is rock n’ roll and feels like a rejäl pungspark we’re happy” – Erik

In 2011, old friend Mads replaced Makkey on the drums and he has brought Suzies some new energy with his death metal-influenced style. “Just for safety”, the boys recorded their eight best songs at the end of 2012 at Uffe Blombergs (Grace.Will.Fall) studio HoboRec.

After finishing the recordings, Shakedown Suzies decided to take a break. Skip to 2017 and the band is back — ready for action! The debut album ”The Chase” is available on digital and stream and on a limited edition vinyl (*puuuh*, Chinese Democracy anyone).

In 2019, a new album is being recorded and the boys aim to release it during fall / winter this year.

This is Shakedown Suzies. With frontman Ricki, guitarist Jon, Agust on the bass and Mads behind the drums, Suzies are heading to the top. With a few minor stops for more beer along the way.”