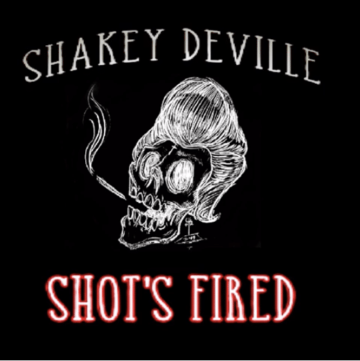 Speaking exclusively to Sleaze Roxx, Staples was asked how Shakey DeVille came together during the summer of 2020 to which he replied: “So me and the drummer [Brandon] pretty much came from the same local music scene here in Greensboro. We were in two different bands at the time but always played shows together, so eventually we started talking about getting together and jamming. Well fast forward, some things happened, and I ended up moving to California, but that’s a whole other story [laughs]! So I move back to Greensboro [North Carolina], but just recently met up with him around February of this year, and we started talking again. We eventually got together and jammed, and as soon as we started playing, I said to myself ‘Hmm, we don’t sound half bad playing together.’

So we started talking more concrete plans, and went on the hunt for the other members. [Lead vocalist] Dan [Miller] was a friend of Dalton’s and we went to a party at his house one night. I remembered he came up on stage with Pröwess one day and asked if he’d be interested in coming out n jamming with me and Brandon. I showed him an original me and Brandon wrote together, which actually ended up being “Shot’s Fired” [laughs] and he was instantly into it! As for Dalton, he is holding it down on the bass. He’s actually pretty good at it too! But Dalton and I had came to an agreement that he’d only be filling in on bass until we found a permanent member. In the beginning, I told him that he’s a lead singer and a frontman, and that I didn’t want to stick him in a bass player’s position because although he’s good at it, he can really shine where he belongs, which is out front.

In terms of whether Shakey DeVille‘s impact on Pröwess, Staples indicated: “Shakey DeVille won’t really interfere with anything Pröwess. I’m kind of a workaholic when it comes to playing music. I hate sitting still [laughs]. So when Pröwess has nothing going on, I try to fill the off day with something related to Shakey DeVille, and vice versa!”

In regard to how the band name Shakey DeVille came about, Staples stated: “The name came to me one day when me and my cousin were hanging out, you know, and talking about cars, and he mentioned that he’s a Cadillac kind of guy. And you know, I agreed, but mine would more than likely be all busted up, and run down. Junk falling off of it going down the road and things like that [laughs]. And that’s when Shakey DeVille popped in my head and it was perfect! It was really as simple as that [laughs].”