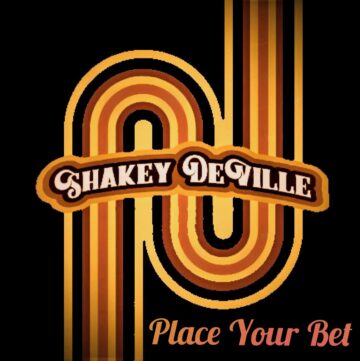 Speaking exclusively to Sleaze Roxx, Staples was asked what prompted Shakey DeVille to release their second single at this time to which he stated: “Well, we were just going to release one single off the EP, and then come out with a video for that single to keep up momentum until the whole EP was done. But with Covid, it was tough finding a studio that was opened, and that we actually liked [laughs]. So far, we’ve been recording with Jamie King out in Winston Salem, North Carolina [USA], and if you know Jamie, he’s a hard man to work with with because his calendar stays full [laughs], but he’s great at what he does! So since the EP wasn’t going to be done when we had planned, we decided to release another single just to kind of hold us over until it is, which worked out great, because making a video for “Place Your Bet” is going to be way more fun!”

In terms of how Shakey DeVille came up with the title Clichés & Contraband for their debut EP, Staples indicated: “I’m not really sure how we came up with the title Clichés & Contraband honestly [laughs]. We’ve had that name since before we even recorded “Shot’s Fired”, so it’s kind of hard to remember the specifics…. for me anyway [laughs]. If I had to take a wild guess though, we were probably at rehearsal one day talking about a bunch of random shit, and Brandon [the drummer] probably said something, or a phrase, you know just joking around. That probably got my gears turning, and at some point came up with Clichés & Contraband. You think we’d remember something like that right [laughs]. But no, we’re all really proud of what we’ve done so far, and how the songs are coming along. The title definitely fits the vibe for the songs that are going to be on the EP though, for sure! We don’t have a release date at the moment, but it’ll definitely be out by the end of the year. With any luck, we should have it done by maybe August, but you would just have to keep an eye on our social media for any specifics!”